Time to change the numbers

Last week The Economist concluded in its lead article that “the country has the wrong government for a pandemic”.  YouGov polled people in 22 countries last week and found that Brits think our government has performed worse on Covid than any other of those countries except Mexico.

From Cummings to care homes, the government has squandered trust. The People, on the other hand, have shown extraordinary self-discipline and sacrifice. In a sweeping outbreak of personal solidarity, The People’s trust in each other was inversely proportional to their trust in the government.

Then the murder of George Floyd erupted, exposing yet again the deep wound of black and brown people’s experience in societies organised for white people. But the crowds who took to the streets looked different this time. They were black and brown and white, melded together demanding change. Again, solidarity flowered.

Those of us who work in diversity initially sighed with relief. Was there finally a gap opening up in which businesses and organisations in the public and private sector might actually stop issuing well-meaning duck-billed platitudes about diversity and instead make some real change? But then the well-meaning seemed to overtake the far-reaching. More and more white people (and businesses) started to virtue-signal their own guilt about slavery. It felt to me – full disclosure, I am white – that white people were once again trying to make themselves the centre of the conversation.

But it’s not about us. We need to listen, really listen and not second guess black and brown people’s experiences when they tell us about their lives. Above all we need to shut up and act. A friend, much wiser than me, once said that when three white people challenge racism when there are no black people around, they will be doing something truly revolutionary.

Guilt is no use. Robin Di Angelo, a professor at Washington State University in Seattle, a white women who studies white racism puts the position perfectly when she says: “The system in which whiteness and white people are central and are seen as inherently superior to people of colour…my world view was formed in that water. I didn’t choose it. It’s not my fault. I am not wracked with guilt about it. But I am responsible for changing it because the default of our society is the reproduction of racism.”

It’s systemic. You may have seen the video of the really unnerving weaponizing of race by a woman in Central Park in New York when she was challenged by a black man who was birdwatching. After the video went viral, he was interviewed on TV and said something extraordinary when asked if she was a racist: “Where she went was a racist place. That action was racist. Does that make her a racist? I can’t answer that. Only she can with what she does going forward”. He was challenging her, not to be better, but to act better.

In this era of identity politics, you don’t just have racist thoughts or say racist things, but you are A Racist. And thus A Bad Person. This is dangerous because it allows those people who think they are not racist to think they are Good People. To claim moral value. But if being anti-racist, and generally anti-discrimination gives you a moral superiority, then how do you face up to the data that tell you that your decisions have had the same effect in your organisation as explicitly expressed racism? How do you deal with the fact that in the business you run, the department you manage, there is a steel ceiling against which black and brown people are endlessly banging their ambition? Businesses are to ready to reach for unconscious bias as the cause. But calling it unconscious is just a much politer way of describing what is, in the effect that it has on people’s lives, still structural prejudice.

Calling our biases unconscious allows us to continue to think we’re Good People and that racism and sexism and the rest are only practised by certain individuals because they are Bad People. But it’s racism and the system that supports it that has no moral value.

While we should examine our individual behaviour, our biggest duty is to bring that system to an end. Solidarity has to be mapped out in a set of positive actions. No amount of virtue signalling will substitute for changing the number of talented black and brown people whom you promote in your organisation into senior roles. Change the numbers. That’s one way of stopping the reproduction of racism.

Simon Fanshawe is a partner in Diversity by Design
www.diversitybydesign.co.uk

He is the author of the report “Diversity – the new prescription for the NHS”
His book The Power of Difference will be published in July 2021.
simon@diversitybydesign.co.uk 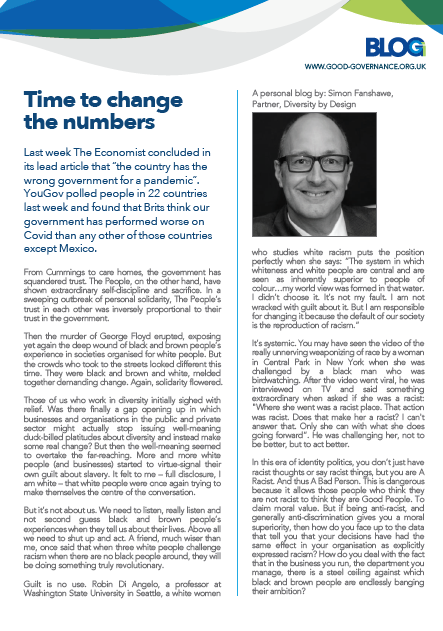