“Until we are all free, we are none of us free.”
Emma Lazarus

The distasteful slip-up in the NHS People Plan that associated being LGBTQ+ with a long-term condition or disability highlights the enormous inequalities experienced by LGBTQ+ people.

The substantive point the NHS People Plan was trying to make was that less than half of those concerned have employment records that reveal they are LGBTQ+ by, for example, mentioning a same-sex partner as next of kin. This is not an inequity that has gone away. The Stonewall report published as recently as 2018, LGBT in Britain – Health, starkly reveals significant inequalities in both healthcare and access to healthcare experienced by LGBTQ+ people.

The internet is strewn with claims and counterclaims about differential life expectancy between lesbians, gay men and heterosexuals. There is clear conscious and unconscious prejudice experienced and reported by NHS employees who are LGBTQ+, despite the counterpoise of some nicely-worded policies and the visibility of a few highly successful NHS leaders who have taken the decision to be openly ‘out’.

There is a message of hope, however, and lessons from the past for NHS boards. In western countries, it was gay men who experienced the most deaths from HIV infection. Those involved in sexual healthcare, health policy and lesbian and gay activism during the 80s and 90s will recall the very real battleground.

This involved a deadly, incurable and poorly-understood virus, a magnificent response through activism from the lesbian and gay community, strong leadership from mainstream politicians (Norman Fowler and Paul Boateng come to mind) and the extraordinary medical and healthcare research and care efforts that rendered HIV to being a chronic rather than a terminal illness – at least for those with access to western healthcare.

The community response and the example of individuals who fought stigma and inspired gay men to gain control over the ‘killer in the village’ offer lessons as we start to pull through a very different sort of epidemic. The London Lighthouse, for example, accelerated the hospice movement and changed attitudes to the care environment for people in their last days of life, despite the clumsy and now infamous statement from one leading politician who said ‘I am not paying for gay men to sit on Heal’s sofas’.

The personal examples set by individuals such as the Olympian Greg Louganis or basketball legend Magic Johnson were key to leading public opinion on HIV/AIDS. But most importantly through a combination of community activism, destigmatisation and of course good old-fashioned medicine, the HIV epidemic in western countries was halted in its tracks in just over two decades. The total UK deaths from HIV have been contained to 20,000 in an epidemic that globally killed 36 million people. The comparison to COVID-19 is stark.

Early on, the NHS and then other arms of government understood that certain communities or groups were where the infections were happening. The 1983 Horizon programme Killer in the Village identified the four Hs – homosexuals, heroin-users, haemophiliacs and Haitians. The tragedy of the haemophiliacs killed, such as Ryan White, is for another GGI bulletin about public protection, but what is interesting was the immediate change in NHS attitude within drug treatment and sexual health. The harm minimisation work through needle exchanges and methadone therapy replaced drug prevention approaches focused on abstinence, and tolerant policing enabled people using heroin to access health services and community outreach without concerns of entrapment.

Gay men, at least, had come through the Gay Liberation experience of the 1970s and there was an established community response that had political legs. However, it is easy to forget that when Terry Higgins died in July 1982 it was two weeks before homosexual acts in one part of the UK stopped being a criminal offence. Legal equality for gay men in terms of the age of consent came only in 2000, and for marriage in all parts of the UK it has taken, unbelievably, to this January.

Removing the criminal records of gay men convicted for acts that would not now be considered a crime was only addressed by the Alan Turing legislation of 2017. In a very palpable sense, there was live, legally sanctioned prejudice against gay men during the 80s and 90s, and indeed the notorious Section 28 that forbade local authorities from actions that could be understood as promoting homosexuality. This was construed by some councils to include targeted health promotion and safe sex advice.

NHS organisations simply ignored this hostile climate and actively sought to build links with the ‘gay community’, from working with commercial companies running entertainment venues through to funding research into detailed sexual practices, such as the Sigma research programme.

Care services themselves became wrapped around the emotional as well as physical needs of patients in a way that was a trailblazer from HIV care and into other specialties. HIV care became the template for patient-centred care with developments that now seem ordinary to the point of banality, such as nurses wearing casual clothes rather than uniforms, staff and patients using first names and sharing of detailed medical records. Rituals such as visiting times were abandoned. Heal’s sofas were indeed installed in some outpatient clinics and gay men were among the many who sat on them.

Much of this was led, from the NHS, by clinicians and managers who were themselves gay or had HIV. There was a fluidity between jobs within the NHS and the voluntary sector with, for example, the leadership of the Terrence Higgins Trust including NHS directors who swapped sides. So members of the very community most attacked by the HIV epidemic, through the NHS and other means, were those who steered the response. There was an empathy and understanding between politicians, policy makers, health service managers, clinicians, patients and their carers but the leadership of much of this was in the hands of gay men within our NHS.

This is all very recent history, and for boards working through their approach to the coming 18 months, as we pull through the first leg of the COVID-19 pandemic, it raises two key points.

Firstly and importantly boards should take the focus that’s been addressing inequality for those from BAME backgrounds and use it to look further and address all forms of inequality. Often forgotten is the good evidence of inequality for people who are LGBTQ+ in terms of health status, access to health services and as NHS employees. That is the critical and constructive point within the hurtful NHS People Plan ‘howler’ that must not be lost.

Secondly is the point about NHS boards being brave and open to activism from those communities most affected by a crisis. Freer of local political control than local authorities, NHS boards can and should still just do the right thing. Their ethical policies should ensure this. Activism can usefully catalyse change. The benefits of this change will spread far beyond those immediately affected. 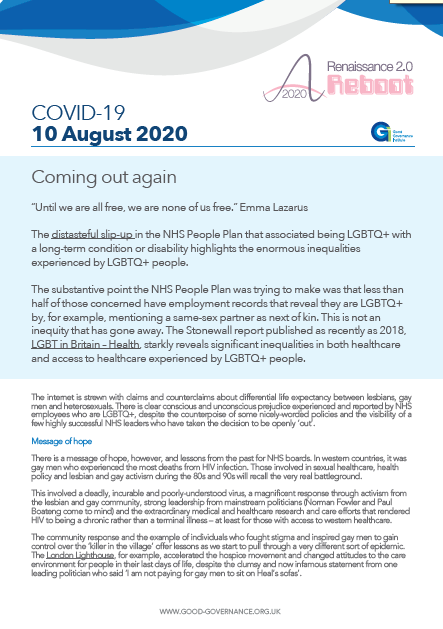 Closing date: 20 August, with interviews to be held late August and early September.  The interviews will be virtual.