Whose system is it anyway? | Good Governance Institute

Whose system is it anyway?

As policy turns to reality up and down the country, integrated care systems are being established. At first the policy wonks said we’d got all the legislation we need to work collaboratively but there are now second thoughts, with the possibility – we haven’t seen a draft Bill yet – of legal form being provided.

Aside from the implications for other legal forms in the NHS what is apparent is that giving ICSs legal form will not solve any existing problems and the success of system working will, as ever, come down to people.

There are almost as many forms of ICS as there are ICSs at the moment – market competition may be on its way out in healthcare but geographical rivalry won’t be so easily eradicated so perhaps there is strength and virtue in variety.

For once, the desired outcomes seem clear. It is difficult to argue with the idea that demographics resulting in an older population with something like two long-term conditions each but living longer than their grandparents will need access to more healthcare. Physical conditions are often combined with mental health issues. And obesity, poor diet and lack of exercise – even before the pandemic – are the biggest risk factors that contribute to early death. Surely a construct that brings together all the health and wellbeing partners in a location with local accountability is good.

That’s the theory, anyway. In practice, dealing with the issues means getting to grips with complexity, ambiguity, chaos and fuzzy, unclear outcomes. The choice of words is deliberate. There is no single roadmap. Ambiguity is where a resolution may be open to a number of plausible interpretations, which in turn leads to uncertainty. Chaos theory looks for patterns within apparent random and complex systems. A sideshoot of chaos theory is a useful warning in Braess’s paradox, which suggests that increasing resources in one part of a system may well create bottlenecks elsewhere unless a holistic approach is taken to solving problems. The same goes for fuzzy logic, which is designed to consider all available information to make the best possible decision in the circumstances.

These all apply to the creation of ICSs – including agreeing that it is an endeavour in common rather than something competitive between institutions.

The NHS Confederation suggests the ideal is something smart, ambitious and translational, confident enough not to need to ask for permission but able to seek forgiveness if necessary. In governance terms, we at GGI think the ability to make binding decisions on behalf of all involved organisations lies at the heart of a successful ICS. To get anywhere near either or both of these aims it is worth looking at formal and informal methods:

These are not mutually exclusive lists and there is little on the informal list that you would not want in place. While goodwill, strong relationships and a commitment to work together are pre-requisites, perhaps the most important are joint values and intent. It’s not about committees – who needs another one of those? – but a mindset shift, thinking about influence and accountability rather than responsibility and statute.

Governance should be concerned with delivering objectives efficiently and without duplication.

So, finally, accountability. Clearly the overarching aim is better outcomes for system users with services tailored to local need. At one level, those involved are accountable to one another and within the immediate community to those either elected or appointed for a purpose. Beyond that, relationships need to be established and developed not only with health and wellbeing boards, NEDs and local NHSE/I but also with CQC, OFSTED, the justice system and so on. Health and wellbeing are as important to these as they are to the NHS and they will want to contribute to improving outcomes – people-centred objectives rather than ambitions.

This will only happen if time is invested in discovering common ground, through shared values and culture leading to agreed behaviours and ways of working together. Undertaking a joint strategic needs assessment together may well unlock some of this but that is not the end in itself.

Systems will succeed when the will to work together within a shared values set and outcome-based objectives allows people to think beyond institution and enables them to continue in the face of disagreement.

A lot of this is about planning and bringing people together from different perspectives but the motivations can and should coincide. Then and only then will the system really take off. 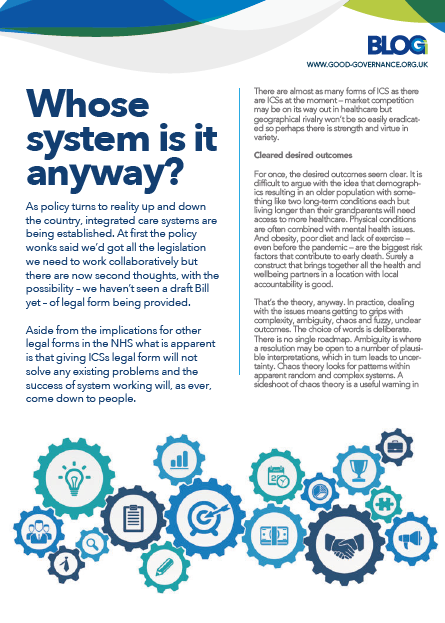