Which comes first, diversity or inclusion?

In April, the government announced that it was suspending gender pay gap reporting for a year to ease the burden of duties for organisations during the coronavirus pandemic.

Failure to make reasonable adjustments is covered for disability and there are other nuances for some other characteristics. These, then, are the statutory supports for employers to embrace and deal with but which are sometimes cited as barriers rather than enablers.

Public bodies are also obliged to ensure that their services meet the needs of their citizen users. NHS foundation trusts have an additional obligation. They are required by statute to develop a membership that is representative of the communities they serve.

They can also point to their role and position in their community. Some are the largest local employer and some are able to offer apprenticeships and training beyond their own needs in a similar fashion to the German ‘dual system’, where large employers see this type of responsibility as a civic duty. Local authorities, and more particularly councillors, stand or fall on the quality and appropriateness of the local services they provide.

But there is still a barrier. In employment it remains the case that staff from non-white backgrounds, if they find a job in the first place, are less likely to be invested in, to be promoted or to find themselves at the top of an organisation. They may be paid than their white counterparts less and be more likely to find themselves involved in disciplinary and grievance proceedings.

Raj Tulsiani, CEO of head-hunters Green Park, recently published a book, Diversity and Inclusion for Leaders, which offers some practical and philosophical suggestions. He takes issue with leaders who view diversity and inclusion as an issue of right and wrong. He sees it as a collaborative journey that is impelled by commercial necessity and benefit – its aim is for inclusion to work for the organisation.

An example of economic benefit lies in the bald figure of £150k, which Tulsiani suggests represents the cost in delivered training alone of losing a middle manager with six years’ experience. He concentrates on fixing systems not people, fixing the processes that decide who advances and who stagnates, and challenges leaders to unpick their route to the top to see where they had an advantage.

Processes are of course easier to deal with than behaviour. He accepts that it may not be possible to eradicate bias but it ought to be capable of being reduced or controlled. For example, the extent to which recruitment processes predict future potential to do the job rather than concentrating on past academic performance.

Reporting and measuring are important and the best return on investment into diversity and inclusion is to be found in the extent to which the lived experience of the target population changes as a result of the inputs. Tulsiani suggests that diversity is in the mix and inclusion the effort to make the mix work so even if you recruit a diverse range of people, it will be wasted if you do not retain them.

In the midst of a considerable amount of practical advice, Tulsiani supports chair of the Liverpool Commonwealth Association Garth Dallas’ four pillars of inclusion:

These need real role models to succeed – especially in the middle of an organisation, given the number of decisions made at that level – driven of course by leadership from the top.

Reframing diversity and inclusion as an element of a talent management programme, offering reverse mentoring can bring powerful insights. In particular, acknowledging as a business leader that inclusion offers business an opportunity and is not a problem to be solved. Indeed, it is not backwards looking but should be looking to the future. Placing enterprise in the community is a powerful symbol of commitment.

The Equality Act allows for positive action; this readable, but uncomfortable and provocative book provides advice to take some. GGI supports this intention and will work alongside its clients to help change to take place protected characteristics offer employers everywhere an opportunity which we should all seize. 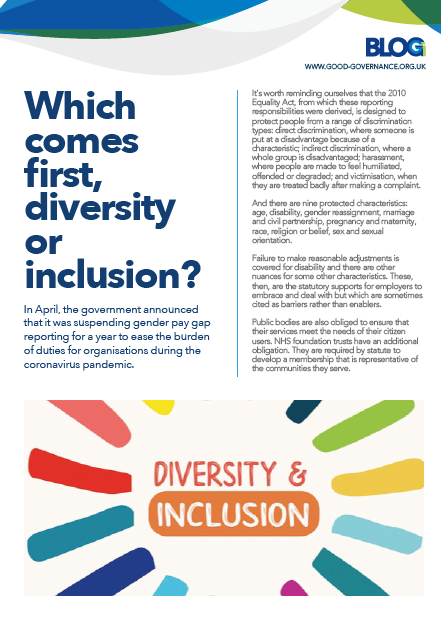