Integration for the sake of it won’t be enough

The NHS Long Term Plan set out an ambition for all of England to be covered by integrated care systems (ICSs) by April this year. The pandemic has accelerated progress by knocking away organisational barriers, and the consummately-leaked White Paper, published officially today (11 February), describes the final coup de grâce of the Lansley Reforms.

ICSs will be NHS-only statutory bodies in two-board systems: one for money and decisions, a second for partnerships and strategy. Clinical commissioning groups will be first defenestrated and then abolished. NHS foundation trusts will be stripped of powers and compelled to collaborate. The wellbeing of the population will be served through the 44 (or fewer) systems reporting, more directly than now, to ministers. A single system, using competition only where it makes sense, will become the English way.

Will all this work? Certainly much of the pain of trying to run a managed system within a market-legal framework will be gone. The hope is that many of the tedious committee arrangements that stifled proper governance can be done away with. The provider market will be consolidated and power structures simplified. The organisational map will look more symmetrical with neat, explicable layers. Political oversight will be more straightforward.

Integration is nothing new

Other parts of the United Kingdom never embraced the internal market and integration has been structurally embedded for years. The Good Governance Institute (GGI) has been a fellow-traveller with various Scottish integrated joint boards and in the last decade worked with every health board in Wales. There are surely lessons to be learnt.

In both Scotland and Wales health bodies and councils are more coterminous than in England, and the public sector generally more streamlined. This makes fertile ground for integration. But has the dial on better outcomes or the more effective use of resources been turned any faster?

In 2016, GGI supported the set up and development of the Aberdeen City Health and Social Care Partnership (ACHSCP).

ACHSCP was established through the Public Bodies (Joint Working) (Scotland) Act 2014, integrating health and social care services in Aberdeen city. The anchor partner institutions were Aberdeen City Council and NHS Grampian, and the aim was to deliver fundamental changes to how acute and community health care services, as well as social care services, are planned, funded and delivered.

GGI helped to develop and establish the effective governance of this new partnership with a focus on board effectiveness, maturity, building a partnership approach to risk management, setting up a new committee structure and helping shape board dynamics, knowledge management and system leadership.

ACHSCP and the work done by GGI was praised by Audit Scotland:

“We have seen examples of good collaborative and whole-system leadership, including in Aberdeen City, where relationships have been built across the partnership. Although differences of opinion still exist and there is healthy debate, Aberdeen City is now better placed to implement widespread changes to improve outcomes. We saw:

What makes a difference?

However, we know (because the Health Foundation kindly tells us so) that in the broadest sense population health outcomes and the use of resources has progressed no faster in one part of the United Kingdom than any other.

There are all sorts of claims: Scotland has more GPs per head of population than England in headcount, but England more than Scotland in WTEs. Waiting times for hip replacement are better in England than Scotland at the 50th percentile, but the reverse at the 90%. Northern Ireland is the best at childhood vaccinations. Wales has overtaken everyone in amenable mortality in women aged 0-74.

If structural variations for NHS organisations have not favoured one part of the UK over any other, why can we be optimistic about the imminent reforms and the new system approach in England? Because GGI is.

The cat is out of the bag

Regardless of the constitution of future ICS boards, the feeling that systems working will be coming has made it happen. There is little appetite within systems leadership anywhere in the NHS to ‘go it alone’. The challenge from COVID has been so enormous that any patience for parochialism has evaporated. Leaderships have had more pressing matters to worry about than turf wars.

And therein lies the opportunity. Though disappointing in many ways, the fact that ICS boards will be NHS-only need not get in the way of an integrated mindset around place. The leaked White Paper has been minimally prescriptive about how place will be developed.

There is a section on ‘The Primacy of Place’, which says: ‘Legislation … needs to be used in a targeted way and in conjunction with a great deal of local and system level freedom to make arrangements that work for all partners. We will not, for example, be making any legislative provision about arrangements at place level.’

In other words, find the way that makes sense locally. 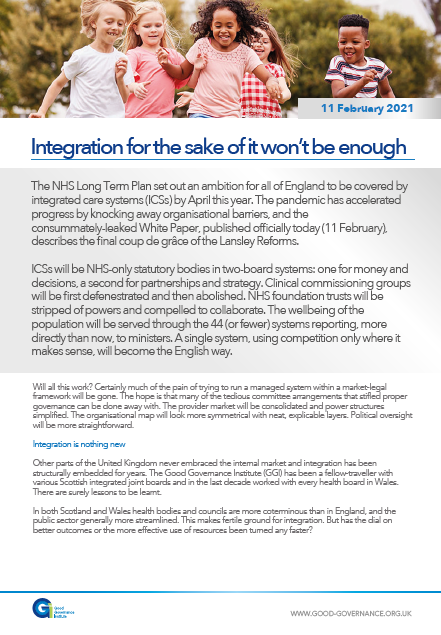