With the ink still drying on the health and care white paper, there is now real momentum building behind integrated care in England.

On 19 March, Sir Simon Stevens confirmed that the final 13 integrated care systems (ICSs), serving 14.9 million people, will be formally designated tomorrow (1 April). This fulfils the ambition, set out in the NHS Long Term Plan, for all areas of England to be covered by ICSs by April this year.

The approach might still be in its infancy in England but similar partnership arrangements are reaching maturity in Scotland and Wales. Advances in these countries offer valuable lessons and a frame of reference for England.

Legislation and political commitment are just the start

England is late to the integration game. The first lesson it can learn from its neighbours is that it takes time and legislation is just the start.

Scottish and Welsh political commitment to integrated healthcare can be traced back to their respective devolutions, with the establishment of 79 Local Health Care Cooperatives (LHCCs) in 1999 in Scotland and the 2001 Improving Health in Wales: A Plan for the NHS with its Partners reforms in Wales. Since then integrated healthcare has become a cornerstone of national health and wellbeing policy in both countries but this has taken time.

Whereas England are only just beginning to legislate for integrated care, in Scotland and Wales they have been doing so for 20 years – showing it takes time to get the financial, regulatory, and structural frameworks for integrated care right for them to succeed. There are significant learnings to take from this development. One example is learning from how Scotland legislated for and managed the merger or commissioning and provision through the 2002 Community Care and Health (Scotland Act) and the 2004 NHS Reform (Scotland) Act. Something which Wales itself did back in 2009.

Wales and Scotland have been on different journeys of health care reform but there are common factors: a consistent longstanding public policy commitment to integrated healthcare reflected in policy and legislation, a rejection of the competitive model promoted by the Lansley reforms in favour of collaboration, merging commissioning and provision, and clear regulatory, governance and funding frameworks.

These legislative changes have led to broad public sector reform, which has laid solid logistical and practical foundations for integration. In Scotland and Wales health bodies and councils, which are single tier authorities, have different models of coterminosity which England could learn from.

In Scotland integration joint boards (IJBs) manage the integration of health and social care services and in Wales it is regional partnership boards (RPBs). Scotland has 14 health boards – which plan, commission and provide local health services – and 32 local authorities which, among other things, provide social care and other public health services. Following the Public Bodies (Joint Working) (Scotland) Act in 2014, Scotland established 31 integrated joint boards to correlate as much as possible with the 32 local authority areas (two local authorities sit under one IJB). In 2003 Wales established 22 health boards to be entirely coterminous with their 22 local authority areas but have since reformed this number down to 7 following the One Wales Strategy. Following the Social Services and Well-being (Wales) Act 2014 seven regional partnership boards were set up, with mixed coterminosity with health board and local authority areas.

The models of coterminosity of Scottish IJBs and Welsh RPBs provide different lessons for England. But fundamentally both provide a great platform for a holistic management of health, integrating healthcare management by NHS providers with the public health management by local authorities through social care and children’s services and their ability to impact health determinants through housing, leisure, education, wellbeing and other key services.

In the same timespan England has worked through adapting to clinical commissioning groups (CCGs), implementing sustainability and transformation partnerships (STPs) and now introducing integrated care systems. The local authority picture is more complex in England with multiple tiers of local government in many areas. Indeed most ICS, like CCGs before them, will have to deal with more than one local government authority, making integration inherently more complicated.

Despite having to cope with this extra complexity, England has something that neither Wales or Scotland do: district and borough councils. In its county areas, England has a two-tier system of local government, both of which play an important role in shaping and improving population health. Although the single-tier systems in Scotland and Wales offer advantages around coterminosity, England’s districts and boroughs are a secret weapon for two key reasons.

Place is key to ICS yet it is one of the least prescribed parts of the white paper, which is an important acknowledgement that place needs to be shaped locally. There are no better experts on place than districts and borough councils. Within counties there can be significantly different health inequalities and population health needs in district and borough areas.

Crucially, districts and boroughs also play a significant role in addressing factors that shape health. They provide services such as infection prevention and control through environmental health services, which also play a role in dealing with pollution of air, water and noise. They deal with housing quality and homelessness, provide key waste services and maintain the safety and cleanliness of the local public realm and green spaces. They also manage the leisure, play and sport facilities in their areas and run physical and mental wellbeing activities. And they play a crucial role in shaping the physical environment of place through town planning and economic and social development.

Time to bring everyone to the table

In ICS work to date, the role of districts and boroughs has sometimes been under-recognised, presumably in part because county councils and unitaries deal with the more obvious health related services such as social care, education and adult and children services. Allowing this imbalance to continue would be to miss a real opportunity.

As the move towards integrated place-based public services gathers pace it is going to be crucial to get all key partners working together effectively and systematically. Crucial to that will be developing a shared language and cultural understanding. And the first step towards that is starting conversations – something GGI has been encouraging in our ICS series of webinars, which bring together around 300 senior leaders across the NHS and local government.

In the weeks ahead we will look more closely at the Scottish and Welsh models, exploring some of the specific lessons England might learn from their approaches to integrated care. 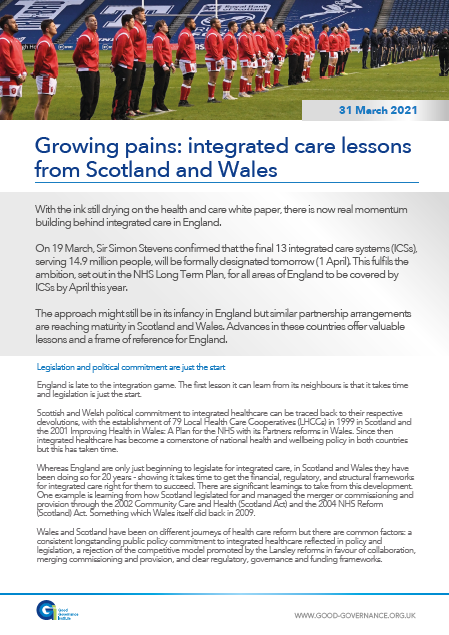