Professor Mervyn King was appointed by South African President Nelson Mandela to develop governance frameworks from 1992. The King Commission now stands peerless as the international authority on governance, and Mervyn King is a member of GGI’s Advisory Board.

In conversation with GGI, Mervyn discusses the critical importance of good governance as the UK Government works on moving out of national lockdown.

The British Government’s ‘stay alert’ message at the weekend was the latest in a series of measures taken by governments around the world to start modifying and easing their COVID-19 lockdown provisions.

As they do this, every one of those governments is trying to strike a balance between the economic and health crises we all face. They must find a way to diversify the tools they have used to suppress the virus if they want to avoid losing 10% or more of their GDP – but they must do this while keeping the all-important reinfection rate per person (or R-number) below one.

I’ve coined the term coronanomics to describe this dual challenge.

Coronanomics is a critical factor when thinking about governance. Some have expressed the view that governments might look at governance with less diligence and exercise more executive power. I think the opposite is a wiser path. Governance is really all about leadership, which is something we are desperately going to need in the next year or two.

What’s happened internationally, since the days of Adrian Cadbury, is that we developed a system of governance that was basically a checklist system: do you have a preponderance of non-executive directors? Do you have an audit and nominations committee? It became something that was grudgingly complied with by both private and public sector entities.

Then we started asking the question that the Financial Reporting Council has in the UK. Environmental, social and governance (ESG) issues are increasingly important in a resource-constrained world with ever-increasing population growth, but what are the metrics? How do we measure these issues?

Globally there has been a move from inputs to more of an outcomes-based approach to reporting – hence the formation of the International Integrated Reporting Council (IIRC) some ten years in 2009.

If you look at the integrated report, it asks what are your inputs to produce your product or render your services and what are the impacts on the three critical dimensions for value creation: economy, society and environment? Finally it asks what the outcomes of all that are on the critical three dimensions.

The consciousness of corporate leadership – and so the world – has moved to mindful outcomes-based thinking. If you look at the Sustainable Development Goals of 2015, they are outcomes based: clean water, clean production and, most important of all, collaboration. Without collaboration between the stakeholders of any entity, the critical outcomes agreed by the UK Government will not be achieved. And by the way if we don’t achieve them by 2030, we won’t have a habitable planet by the end of the century.

What are the outcomes from which we can reasonably infer that an organisation has been practising quality governance? First, it’s about sustainable value creation, not just profits. It’s about ethical culture with effective leadership – and that means individual leaders and the collective mind of the governing body being conscious of adding value and thinking about the quality of governance.

It’s also about informed oversight. Boards’ oversight of management used to be blind because management failed to pass on information about stakeholders’ needs, interests and expectations, so boards would look at management proposals and have oversight over these – but that’s not informed oversight. It’s critical that the governing body has an agenda item on stakeholder relationships at each meeting, featuring reports of the needs, interests and expectations of each stakeholder so that the board can make decisions in the long-term best interests of the organisation.

The importance of being understood

Accountability is a critical part of governance and leadership. Governing bodies must account for their activities in an understandable manner. What company directors did for years is report an annual financial statement that was incomprehensible to 99% of people. Then companies and entities started filing two reports, on finance and sustainability.

But the governing body has a responsibility to extract the right financial and non-financial material and highlight them in clear concise and understandable language to all stakeholders – let’s call it a strategic report like they do at the Financial Reporting Council. In this report, the board must highlight critical material issues and describe the challenges and circumstances of their organisation in the context of coronanomics. How is the entity going to survive in the long term?

What leaders of both public institutions and private companies and their organisations’ stakeholders must do in the months and years ahead is have an integrated, collaborative and compromising approach because many service providers and suppliers to the NHS are going to struggle to survive, which is going to be critical to the NHS carrying on its role and service. Wages might have to be cut; management might have to accept reduced fees.

We’re going to need this integrated, collaborative and compromising approach to all stakeholders for the survival of organisations in these crises of coronanomics.

As leaders, if we don’t make sure requisite organisations survive, the infrastructure could collapse, the human resources could be dispersed and then it will be difficult to recreate it.

It’s going to take a huge amount of leadership and a big mindset shift to deal with the challenges of coronanomics because nobody in this dual crisis will be able to survive alone.

We are keen to hear your views. If this briefing prompts any questions or comments, please call us on 07732 681120 or email us at advice@good-governance.org.uk. We will aim to respond within 24 hours. 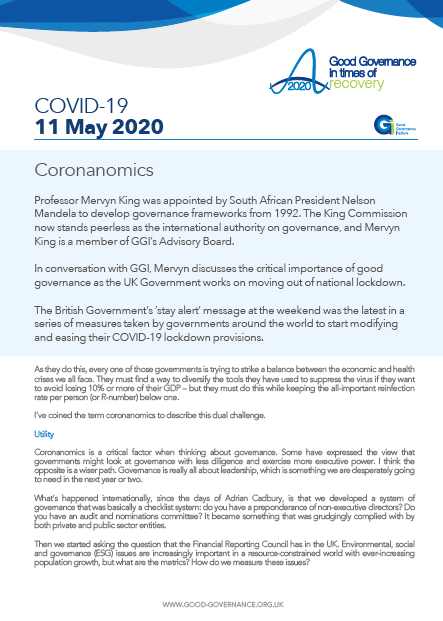