The idea of a tight community, where one checks in on an elderly neighbour, cooks hot meals for a poorly family or does the shopping for someone who can’t do their own, seems rather distant in the 21st century. That sort of community spirit feels like it’s from a bygone era – a time when anyone could be a character from Call the Midwife and we all knew our neighbours’ names.

The expansion of the welfare system, better local authority coordination and the work of worthy charities has resulted in British people becoming less reliant on one another. Community spirit has gradually been replaced by individualism, to the point where starting a conversation with a stranger can be seen as an act of microaggression and we barely know the people who live next door.

So perhaps it was quite surprising that in the midst of the global pandemic, volunteer grassroots movements sprang up all around the country – and indeed the world – to help those the system could not reach. Thousands of people with no previous experience in charitable or social work have come together to form community-based groups from their kitchen counters.

COVID-19 has made us more aware of our neighbours’ needs and introduced terms such as ‘mutual aid’ to our vocabulary.

From dependency to communitarianism

The pandemic has shown us just how dependent we are on formal entities like local authorities, schools and charities. We have become overly reliant on traditional institutions to empty our bins, find shelter for the homeless, provide social care and deliver meals to those who need them.

When lockdown constrained or shut down many of these formal institutions, people found themselves with no one to turn to for help or advice. So the community came together. In an organic fashion, thousands of people joined community efforts to set up mutual aid groups and support the most vulnerable in society by volunteering to do essential tasks such as weekly shopping, cooking meals or even just phoning a lonely person who is shielding.

The first mutual aid group emerged in March in Lewisham, London, and by the end of the month hundreds had been set up across the country. The main distinction between these voluntary groups and charities is the way they organise themselves. Unlike charities, each mutual aid group is independent – albeit coordinated by an umbrella organisation –  and is not subject to formal organisational structures, sponsors, programmes or reporting. They rely entirely on a network of volunteers developed through social media.

But it wasn’t only grass roots movements that reached out to the community for help. The NHS volunteer scheme saw 750,000 people signing up – far exceeding demand. Examples from across the globe include the Fijian community returning to traditional forms of equitable, cooperative food distribution to make sure no one was left out.

The return of a community conscience and spike in voluntarism has the potential to mark a change of paradigm in the public sector. In less than a month, small independent grassroots movements managed to gain access to crucial information and data about the needs of their local population that would have taken months for local or national authorities to acquire.

When mapping out a new post-pandemic world, local councils should have the humility and courage to work with residents and community groups to learn about citizens’ needs and address them collaboratively.

One of the biggest changes that should take place lies at the heart of how central government operates. Our leaders need to move away from a view that everything should be organised by the state or the market, with the charitable sector picking up the leftovers. The focus should go back to community resilience and work at local systems level, as proposed with the current population health approach.

The charitable sector should also draw lessons from how grassroots volunteer groups work from the ground up. Grassroots movements saw volunteers self-organising with impressive efficiency and creativity, reaching thousands of people at a speed that charities struggle to match. The decentralised approach and use of technology  (Zoom and WhatsApp in particular) have shown the charity sector how to quickly adapt and reach lots of people.

Besides learning new ways to operate, charities should also take this opportunity to rethink their place in the community. The way people have come together to support each other highlighted the distinction between solidarity and charity. While charity is seen as vertical, operating from top to bottom, often bureaucratic and slow to act, solidarity is horizontal, across the community, based on volunteer actions or services.

Finally, public sector boards ought to seek more active engagement with the populations they exist to serve. Allowing the community to have a bigger voice in decision-making processes will give boards a better picture of the context and needs of that community. Well-informed boards will result in better health and social care systems across the country.

The start of a new era

This pandemic has shown us that in a global crisis the focus of action is local. When well-established systems and institutions fail, communities look within for mutual support. More than teaching us how to bake and grow vegetables, COVID-19 and lockdown have generated a new community spirit, prompting signs of social solidarity.

Just as with conflict and natural disasters, this pandemic has the power to end one era and start another. The public sector should grasp this opportunity to develop system working and notions of population health.

Communities have proved themselves to be open to collaborative working; the spirit of solidarity and community have the potential to change our relationships with each other and with our institutions.

Public sector leaders should take advantage of the momentum created around community spirit to understand what the ‘new normal’ might look like. We would prompt leaders to think about the following key points: 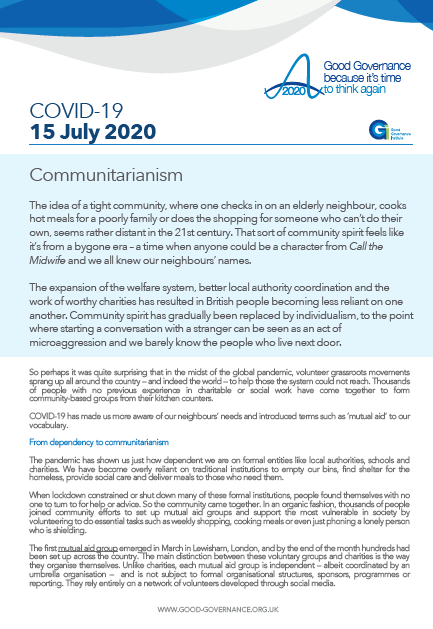