If you were around at the beginning of the year, you are likely to have caught a whiff of Dominic Cummings’ blog about refreshing parts of No 10 Downing Street.  The press reports focussed on his aim of recruiting wierdos and misfits with odd skills – especially as I thought that was the role ministers played!  But, the blog is interesting and stimulating and contains real food for thought.  So, to set the New Year rolling, I thought I might try to think about what serious disruption might do for/to the NHS.

The Cummings blog wants people in No 10 who can embrace new systems, thinking, technologies and logic for example applying early warning systems from nature research based on tipping points where systems shift abruptly from one stability to a new stability; forecasting using artificial intelligence – applying more what ifs and counterfactuals to the thinking and really embracing machine learning and its associated tools.  He reminds us that this is a “new government with a significant majority and little need to worry about short term unpopularity while trying to make rapid progress with long term problems” and warns us that “…it will seem chaotic and not proper No 10 process to some.  But the point of this government is to do things differently and better and this always looks messy.”

Matthew Parris, in The Times, and Roy Lilley in his Blog both have interesting comments to make.  Lilley references Col John Boyd, the Sun Tzu of the US Marines, who reminds us that “the best technology in the hands of a poor performer won’t improve outcomes and neither will the best ideas.  People come first.”

So it’s not disruptive so much as essential that the NHS continues to recruit and invest in the best people it possibly can.  This should include decluttering leadership and simplifying the alphabet soup of NHSE, I, CQC, PHE, HEE, DHSC and myriad others on the pitch – enabling ICSs to work consistently would be a good start.  Redo commissioning and the purchaser-provider split and make leadership local whilst acknowledging the crucial role of teaching, research and specialties that cross arbitrary geographical borders.  And in terms of leaders – surely the tried and tested triumvirate of Doctor, Nurse and Manager, as proposed by Griffiths, remains the best solution.  The disruption here is being brave enough not to disrupt.

It’s time we took on the chin the fist fight that would follow taking GP care fully into public ownership.  It doesn’t work properly everywhere so a new model – possibly hospital led but not necessarily: needs big brain thinking – has to be devised so we end up with a working system.  And that also applies to those services paid for by local authorities – including pre school services, public health and health visiting – which are inconsistently available often because of financial issues.

Ah, money, the sordid topic of coin!  Is the Treasury to be disrupted too I wonder?  After all the PM is also First Lord of the Treasury…we need to plunder the expertise of the commercial and property worlds to come up with answers to the capital shortage and even more significantly the revenue consequences.  There are solutions out there that are a million miles from PFI where developments are structured to meet the aspirations of all participants – but not if the Treasury’s default response is “no”.  And the current “generous” offer of £20bn in reality doesn’t even keep up with either growth trends or demand.

To be honest, I’m not sure how disruptive this lot would be but I’ve a suspicion that being able to rhapsodise without worrying about what other institutions will think, say or do, would be a welcome and refreshing blast of air – blow away the cobwebs and you never know what may be lurking behind them! 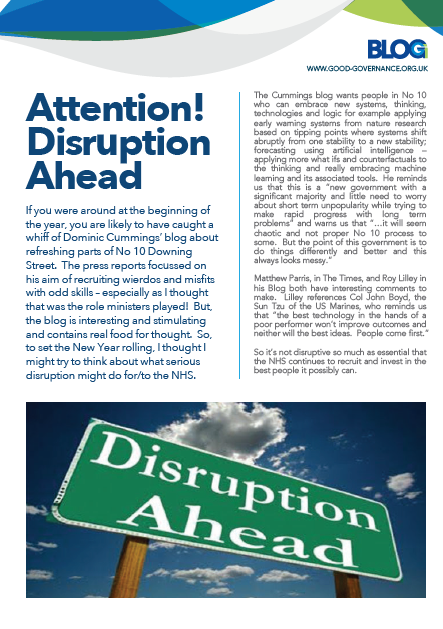