The COVID-19 pandemic and the UK lockdown has separated us from each other like nothing else in our collective history.

The data has clearly shown that, although we are ostensibly ‘all in this together’, some groups are more likely to be exposed to the virus and some – including BAME people, economically challenged people, older people, neurologically diverse and people suffering with their mental health, and ‘gay’ people – suffer disproportionately when they are infected.

Early on in the crisis, community leaders raised alarms that the message about the dangers of COVID-19 and the way it spread was not connecting with everyone and that some people’s circumstances meant that they could not avoid the virus as effectively as others.

We have seen evidence of responsible CEOs reaching out to more vulnerable groups, such as BAME members of staff, to address concerns and take action to mitigate the impact of the virus. But reaching out effectively means truly understanding the communities you serve – not just at a superficial level but in a way that acknowledges real-world granularity.

What is a community?

A community is defined as a group of people with a tangible or symbolic connecting structure – for example, location, job role, identity or shared values. Place is often seen as the most obvious defining feature, but this can be problematic as it negates the importance of other key community identities.

Communities are meaningful social structures, because of their contribution to everyone’s survival in the world (Cohen, 1985). They are dynamic, fluid and alive social systems to which we often attach positive association.

But our efforts to define communities can also lull us into a false sense that we have covered all our bases, when in fact the work has barely begun. Every member of every community is an individual first, then associated with numerous groups, some defined by predetermined characteristics such as race, age, or birth gender, some defined by more circumstantial characteristics, such as location, sexual identity or body shape, and some by more granular factors such as a taste for hip hop music, or a shared experience of suffering from racism. Every person sits at the centre of a complex picture that we oversimplify at our peril.

The perils of lazy engagement

Convenient though it may feel to focus on ‘the BAME community’ with coronavirus messaging, it is lazy, disrespectful and plain wrong to make assumptions about the homogeneity of that community. A young black, west African gay man who enjoys drag will not respond in the same way as a Somali refugee mother who sits on her local Muslim Women’s Network.

A useful precedent of this granularity issue comes from the gay community. During the early stages of the HIV epidemic in the 1980s, the high incidence of the disease among gay men led many to believe it was a primarily gay disease. During those early crisis years, it suited the purposes of ‘the gay community’ to be seen as such.

But over time, as the emergency eased and understanding grew, it became increasingly important for many in that community to identify more specifically, to the point where we now have the abbreviation LGBTTQQAAIP (lesbian, gay, bisexual, transgender, transsexual, queer, questioning, intersex, asexual, ally, pansexual) to describe the community’s constituent parts. And of course behind each of those letters lie numerous further subgroups – just as the abbreviation also inevitably excludes people who don’t identify with any of the groups.

In the same way, when the disproportionate impact of COVID-19 on non-white people was identified, it was useful to find a convenient way to capture the umbrella group affected. But the flaws of this generalised approach were always going to be revealed, as indeed they have been. Boards must recognise this and act accordingly. But what should that action be?

One of the challenges boards face is that the groups that are the hardest to reach will be those that may interact with the NHS the least. So existing information sources such as patient survey data may be of limited value.

That means it’s necessary to go outside the NHS and really study the community you are part of –beyond the context of health and social care – to find out about as many groups and sub-groups as possible. Do you know about your local faith communities? Which sub-groups do the west African drag queen and the Somali mother belong to? What about the local gyms, or the local sex workers?

Then it’s important to build strong and durable lines of communication with these groups, as well as offering clear and welcoming pathways for self-identified communities to work with NHS organisations to help their own health outcomes – for example by providing open forums that are seen as safe spaces. There will be many existing specialists out there who are keen to help. It’s an exercise in getting close to the people who are close to the people.

We’ve written before about the pivotal role of the NHS in society. This responsibility to understand more deeply the communities we serve only underlines that role. Embracing the whole community in this way is difficult, painstaking work but it will serve the NHS well – both to limit the future impact of COVID-19 but also far beyond that.

We are keen to hear your views. If this briefing prompts any questions or comments, please call us on 07732 681120 or email us at advice@good-governance.org.uk 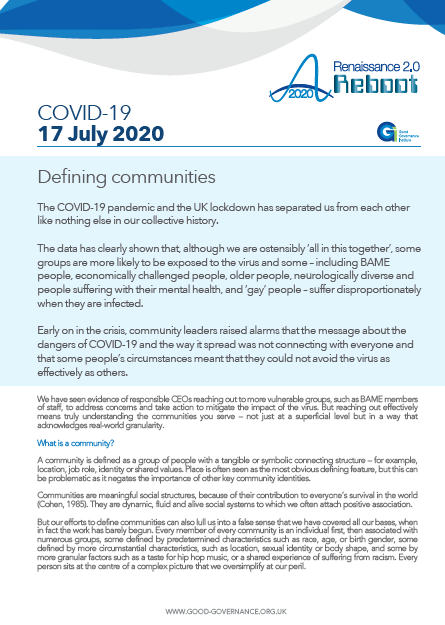