The ICS case for the Buurtzorg nursing community care model

Dutch historian Rutger Bregman, who famously disrupted the World Economic Forum in 2019 by criticising wealthy countries for not cracking down on tax avoidance, doesn’t have much time for hierarchies.

In a 2020 interview, Bregman describes how the founder of the Buurtzorg neighbourhood care model Jos de Blok told him, in terms too colourful for a GGI Illumination, that management was overrated and people should just be allowed to get on with their jobs.

Bregman says: “It seems a bit too simple to be true, but then you realise that he has actually built one of the most successful health care organisations in the world and there are experts from around the world coming to visit him because they want to see what makes his model so successful.

The Buurtzorg motto is ‘humanity before bureaucracy’. At the heart of the approach is the empowerment of nurses to deliver all the care patients need, rather than using nursing assistants or cleaners. This results in higher care costs per hour for patients but fewer hours in total – a reduction of up to 50 percent, according to a KPMG case study. It also improves the quality of care given and the job satisfaction of the nurses who deliver it.

The Buurtzorg model grew quickly in the Netherlands, its country of origin, jumping from just one team to 850 in a decade. It has now spread from community nursing to other areas of care such as mental health, children and families. By the time Buurtzorg celebrated its tenth birthday, in 2016, it was active in 24 countries around the world.

Buurtzorg time in the UK?

Might the shift to integrated care mean that Buurtzorg’s time has come in the UK?

Buurtzorg experiments in England have included two community nursing projects in Kent. One of the care nurses involved, Sandra Sharp, told Nursing Times: “We’ve had high patient satisfaction and job satisfaction for ourselves. It’s a very different way of working for us because we’re a small team and we make these decisions together. […] The idea is that we have smaller caseloads which gives us more time and flexibility to do that care planning with our patients. It’s about enabling, as well, the patients, their family and close neighbours to be more involved.”

A trial in West Suffolk in 2017 would also indicate that Buurtzorg deserves at least some consideration as a future model of care. In its report on the trial, The King’s Fund noted that the service had provided some ‘outstanding holistic care for patients/clients’ and that enabling team members to provide this sort of care had the potential to ‘re-engage the vocational drive of nurses’. It also remarked on the commitment to the Buurtzorg vision by senior leaders across health and social care, praising the ‘strong and positive engagement’ at steering group level.

Despite these successes, The King’s Fund described the initiative as a ‘highly ambitious transformation project’ due to the traditional separation of health and social care, and the strongly hierarchical nature of nursing in England.

But the first of these factors is no longer the hurdle it was in 2017. The age of integrated care is upon us and with it comes a responsibility to bring together the worlds of health and social care like never before.

It wouldn’t be easy to bring about the structural and cultural changes that would be required to adopt Buurtzorg at scale in England. It would still take a long time to embed new ways of working and, as the King’s Fund noted in 2018, ‘the benefits of such innovations may show up in a range of ways not captured by emergency admission rates’.

But it would be missing a trick not to at least seriously consider it. If as a nursing manager you were told there was a way to improve the health, happiness and wellbeing of the people you care for while increasing levels of contentment and commitment among staff and making financial savings, you’d jump at the chance to find out more. Wouldn’t you?

If we allow ourselves the courage to challenge some of the fundamentals of nursing management and practice, one of those opportunities looks as though its time may have arrived.

If this Illumination prompts any questions or comments please call us on 07732 681120 or email advice@good-governance.org.uk. 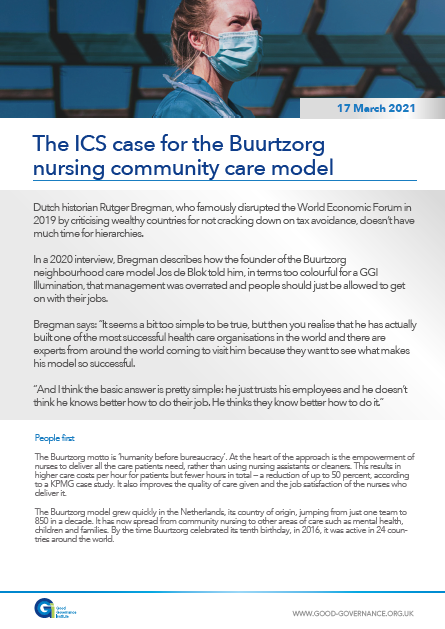