Solidarity with BAME people in our communities | Good Governance Institute

Solidarity with BAME people in our communities

The way forward seemed pretty clear. We said: “The evidence might still be coming in and the picture may not yet be complete but the time for action across the NHS – at local and national levels – is right now. The three pillars of recovery plans should be testing, health and safety and shielding vulnerable groups from COVID-19, including BAME people in your organisation and in your community.”

Since then, the issue has rarely left the front pages. In its report Disparities in the risk and outcomes of COVID-19 published earlier this week, Public Health England (PHE) described the risk to those with Asian, Caribbean and black ethnicities as ‘disproportionate’, observing that these groups were up to twice as likely as white Britons to die if they caught COVID-19, but didn’t address why this might be the case.

Then an article appeared in the Health Service Journal claiming the government had removed a key section of the report that featured input from 1,000 organisations and individuals who had been approached to supply evidence. The HSJ reported that many of these submissions suggested discrimination and poorer life chances played a significant part in the increased risk to the BAME community.

Culture of discrimination and racism

HSJ quoted this omitted comment from the Muslim Council of Britain: “With high levels of deaths of BAME healthcare workers, and extensive research showing evidence and feelings of structural racism and discrimination in the NHS, PHE should consider exploring this in more detail, and looking into specific measures to tackle the culture of discrimination and racism. It may also be of value to issue a clear statement from the NHS that this is not acceptable, committing to introducing change.”

The government had already been criticised by Labour politicians for delaying the publication of the report, which had been scheduled to appear in May. Shadow women and equalities secretary Marsha de Cordova called the delay ‘unacceptable’ amid speculation that it had been in part due to the global outcry over the death of George Floyd, the African American man who died while being restrained by a Minneapolis police officer. An official from the Department of Health and Social Security denied this claim.

Health Secretary Matt Hancock said he understood why people were angry and added that he felt “a deep responsibility because this pandemic has exposed huge disparities in the health of our nation.” Mr Hancock said more work needed to be done to understand these disparities, adding: “We are absolutely determined to get to the bottom of this and find ways of closing this gap.”

GGI welcomes the Health Secretary’s commitment to addressing this issue. We were also pleased to see the Equality and Human Rights Commission’s announcement, earlier today, that it would carry out in-depth analysis and develop evidence-based recommendations for urgent action to tackle entrenched racial inequalities.

It’s important to avoid jumping to hasty judgements on this emotive issue. But some of the basic facts are indisputable. As a recent King’s Fund blog post pointed out, “people from ethnic minorities are more likely to have underlying health conditions that make them more vulnerable to the virus, work in roles where they are exposed to it and live in conditions in which it is more likely to spread.”

It adds: “NHS staff are also subjected to racism by patients and other members of the public during their work with predictable consequences for their health and wellbeing. Staff survey data from the NHS shows that 29 per cent of ethnic minority staff have experienced bullying, harassment or abuse from other staff in the past 12 months.”

These are uncomfortable and sensitive issues that are difficult to address but that must not be allowed to delay urgent discussion and decisive action. Health leaders and politicians have the same duty of candour as clinicians when things go wrong.

Next steps from the Seacole Group

One of the groups already engaged in this difficult conversation is The Seacole Group, which comprises black, Asian and minority ethnic (BAME) NHS non-executive directors. The group’s purpose is to strengthen BAME NED representation and voice on NHS boards. GGI has been working with the Seacole Group, hosting meetings and webinars to provide a platform for this important debate.

A more in-depth paper on the issues raised in this bulletin will be available on the GGI website and in our newsletter later today.

We look forward to the Seacole Group’s next meeting on 19 June, when NHS Confederation Chair Lord Victor Adebowale will be on hand to discuss the NHS Reset and the newly established Race and Health Observatory, which has been established to investigate the impact of race and ethnicity on people’s health.

These important discussions will doubtless continue for some time. But now is the time for local staff networks to challenge their boards on these issues via engagement with chairs, asking the difficult questions that need to be answered to find ways of developing action plans towards recovery with full engagement of their BAME staff groups.

Boards should be scrutinising their board assurance frameworks to establish whether HR and people aspects are covered as a strategic risk – and if COVID-19 risks with a clear and specific dimension to the issue of BAME staff protection is also covered.

This is also about BAME patients so a similar challenge should be put to the boards for the patient communities. 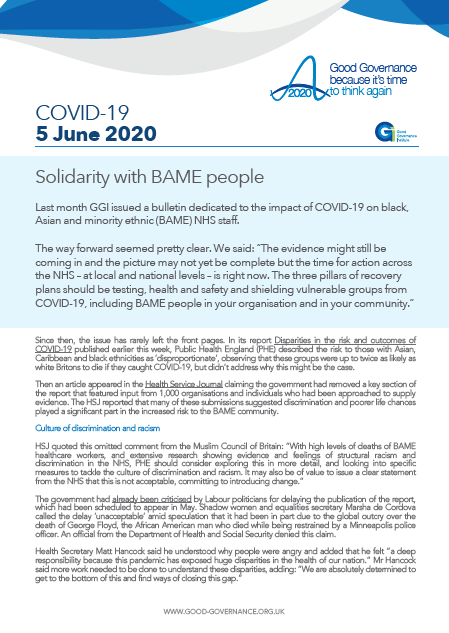