COVID-19 has had a devastating global impact on the arts as theatres, galleries and concert halls were forced to closed and events were postponed or cancelled.

Galleries around the world are facing a massive fall in their income – with one survey by The Art Newspaper estimating that they would lose up to 70% in revenue, leading to the expected collapse of up to a third of businesses. In fact, UK galleries had the bleakest outlook in the survey, predicting a 79% drop in their income.

The UK government support schemes for businesses and workers have helped a little but there is a very real prospect of that support tailing off before arts establishments can fully recover. Organisations from the Royal Theatrical Fund to the Musicians’ Union have stepped in to offer support to arts businesses and practitioners but with the charity sector reeling under the same pressure as the arts from COVID-19, that support can only be expected to go so far.

The arts have responded to this unprecedented challenge in many innovative and enterprising ways. Visual artists have taken to online platforms to find an audience – and, crucially, a market – for their work. Theatres have also taken their work online, in some cases – including The National Theatre –  showing work free but inviting audiences to make donations of support.

Hastings Contemporary, a gallery in East Sussex, was just one of many arts organisations thrown into emergency mode when doors were forced shut by lockdown. Director Liz Gilmore says: “We operate on the basis that 80% of our income is earned, primarily through ticket sales and our shop and café from our 50,000 visitors a year, so the lockdown was potentially catastrophic for us. We had to think quickly about how we were going to survive.

“Apart from our direct earnings from tickets, shop and café, we also had three major fundraising events planned that would be likely to have secured sufficient funding to keep us going for a couple of years.

“We perhaps didn’t appreciate at the time that we were looking at a marathon rather than a sprint. We knew we’d be closed for a month or two but it was hard to see beyond that.”

To maintain the gallery’s public profile, Gilmore and the Hastings Contemporary team decided to accelerate a project they were already working on to use a telepresence robot to conduct tours of the gallery, which could be shared online for the benefit of people who wouldn’t otherwise be able to see the art. The gallery was collaborating on the project with disability community access group D4D, Accentuate and Bristol Robotics Lab.

Hastings Contemporary’s robot tours don’t earn money directly but the initiative has generated a global flurry of media interest that has kept the gallery visible and enabled it to engage with audiences both locally and globally. And, as Liz Gilmore says, ‘core to our viability is visibility’. The project has also rapidly advanced what Gilmore describes as the ‘underexplored and underexploited’ potential of robotics in reaching isolated groups, something she says highlights the important role museums and galleries have in maintaining social cohesion.

The same robot technology was used to launch an exhibition of artist Sir Quentin Blake at the gallery, called We Live In Worrying Times. Blake is clearly impressed by Hastings Contemporary’s enterprise. He said: “No doubt there are institutions which, in such a situation as this, can do nothing except close their doors. Hastings Contemporary is not like that, so I was not altogether surprised when the gallery quickly responded to the situation with an alternative digital offer for We Live In Worrying Times.”

The artist is also continuing to donate his lockdown drawings to Hastings Contemporary, which Gilmore hopes will raise as much money as the gallery has lost in ticket sales. Other artists have also donated work for an alumni sale; and an auction that was due to take place at Christie’s has now been moved online. Between them, these measures will help secure the immediate future of the gallery.

Gilmore says Hastings Contemporary has had to ‘run as fast as possible’ to survive but given the cataclysmic events of the past few months, survival of any sort constitutes success.

When lockdown began, the gallery was already going through a major transition from being a showcase for a private collection to becoming an independent charity, which Liz Gilmore thinks helped. She says:  “We’d been in transition for about a year so we were already going through a process of change. We could see the warning signs of another high impact situation and were able to act very quickly to consider alternative ways of operating. I think our ability to move in an agile way and to be responsive to change at a difficult time has been key to our survival so far.

“The old gallery has gone. Rather than looking back, to survive, we knew we had to rethink and repurpose ourselves. And we had to do it urgently but without panic. We needed to think laterally.”

None of us knows what the future has in store. We realised we must live with and embrace that ambiguity and uncertainty. The key is perhaps to stay agile and remain open to change.

We still don’t know exactly what the future looks like, but we do know that we must stay supple to respond to the unforeseeable.” 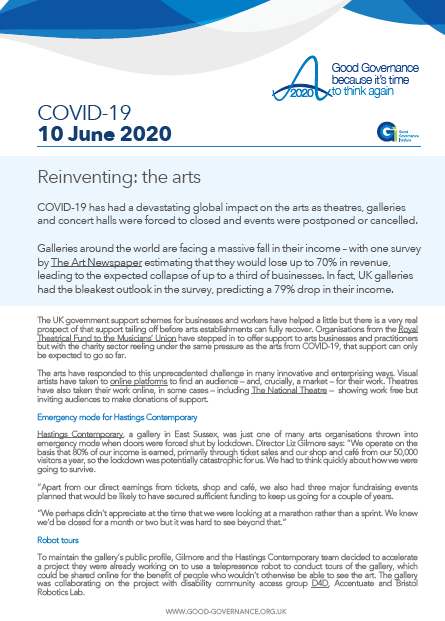