This bulletin looks at the dilemma facing the government about whether or not to bring change to the NHS by legislating. It’s a ticklish question. The recent track record on major legislative change has been mixed, with the Lansley reforms of 2012 probably the least successful of recent times.

That is not to say change is not afoot in the NHS today. Even before COVID-19, the delivery of the NHS Long Term Plan was dependent on significant change. It also required a shift of perspective to create system collaboration between institutions and sectors, to cope with huge alterations to tariff and payment regimes and an inexorable levelling – up or down was not clear – of provision.

Late last year, NHS England proposed a bill that had been worked on by the Health Select Committee, whose aims were to help with the delivery of the Long Term Plan. It intended to free up the competition regime, liberalise some aspects of procurement and change tariff in support of a new, triple aim of better health for the whole population, better care for all patients and financially sustainable services for tax-payers. (The workforce was a notable absentee from that list). It proposed no administrative reorganisation and suggested that as ICSs would set up voluntary decision making committees, they would not need to have any legal form.

Inevitably, the pandemic put this on hold while all NHS resources were devoted to dealing with the here and now. The inevitable investigation into how we reacted to the pandemic will follow but the tensions between Downing Street, the DHSC and NHS England have been evident. So the Guardian’s recent story about a taskforce looking at how to wrest back control of the NHS to the politicians came as no surprise.

The Guardian article claimed that a radical shakeup of the NHS is being contemplated, to reclaim authority over NHS and unwind the Lansley reforms. Foundation trusts seem likely casualties; their demise would allow the secretary of state to resume a more interventionist stance on spending and clinical priorities. These reforms are part of the suite also reviewing universities and the military.

The changes being considered will look at dealing with those parts of the system judged not to have done well during the pandemic – for example PHE and HEE – and building on some of the successes, including better and faster system working, and changes to medical practice with more remote consultations by GPs and for outpatients. The lack of ministerial leverage over track and trace, testing, PPE and workforce recruitment have been highlighted, as has the Treasury’s frustration at the lack of return on the considerable sums of money put into the NHS. Waiting lists remain stubbornly long and trusts are still not in financial balance.

Giving ICSs a legal form may have its attractions but there are dangers with the package as a whole. Does the NHS need a distracting, disruptive reorganisation as it emerges from the pandemic? The changes to tariff to pay for courses of care rather than individual episodes may work well for district general hospitals but has the potential to cause problems for single specialty trusts such as the Royal Marsden and Moorfields and may also be challenging for the major teaching and research trusts. And why would you expect a political leader, however skilled and talented they may be, to be better able to run an institution like the NHS than someone brought up and trained to lead within the system?

It may be worth testing the appetite for reform. Beyond the power struggle described by the Guardian, giving more certainty to system working may be sensible. The attractiveness of the current arrangement – which is not to have an arrangement but to let people locally devise a system that works for them – is fine if it works or indeed survives the first major argument between partners. But if it fails then the interests of patients, carers and service users will suffer so it is possible that even if a laissez-faire arrangement continues for now, someone will need to sort it out later. And if that is the case, perhaps it is better to address it now.

Perhaps we should remind ourselves of Bevan’s original vision for the NHS in 1948 – to “universalise the best care…based on need rather than ability to pay” – and ask ourselves in the twenty first century if we still accept that vision. Assuming we do, what is the best way to continue to deliver it? Through continuing incremental reform of the NHS or the Government’s apparently more radical proposals?

Food for thought for boards

The coronavirus crisis continues to dominate NHS board discussions but it would be unwise to ignore the possibility of imminent legislative change. Boards would do well to consider the following questions. 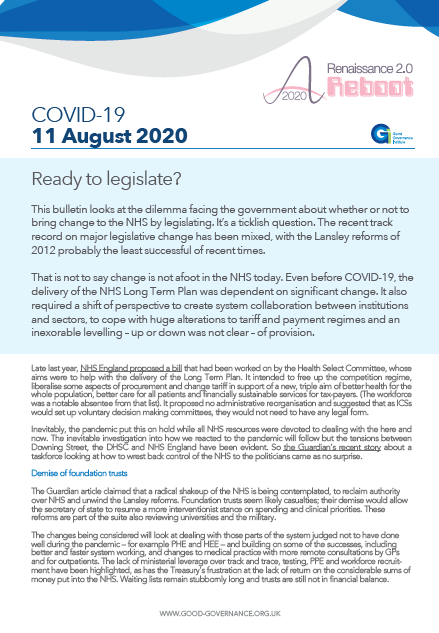