Putting the citizen at the heart of the NHS

The NHS has suffered arguably its toughest year since its inception in 1948. Through this difficult time, what has been illuminated is that when the going gets tough, the tough collaborate.

Gone are the days when neighbouring trusts were pitted against each other in competition.  During this year of crisis, the foundations of health and social care collaboration, built over the past five years, have created the environment for unprecedented levels of mutual aid and support, not previously thought possible. This has galvanised the government to push on with the publication of its white paper Integration and Innovation: working together to improve health and social care for all to accelerate the move to further integrate care through legislative change.

Despite the current narrative, integrated care is not a new concept – far from it. Back in 1968, The King’s Fund (when it was the King Edward’s Hospital Fund for London) published a report[1] entitled Working together: a study of co-ordination and co-operation between general practitioner, public health and hospital services. This was a mere 20 years after the establishment of the NHS. The report suggested that ‘much better cooperation must be achieved if the main divisions of the NHS, hospitals, public health and general practice, are to make best use of limited resources.’ It went on to give examples of how that cooperation could be best achieved.

If it’s so obvious, why have we not managed to pull it off in 50 years?

Putting aside matters of funding, it seems the fundamental challenge is one of definition. This means that the lens through which decisions are made is fundamentally mismatched between health and social care.

Local authorities (and therefore public health and social care) define their customers as the citizen and see through the lens of place and population. Whereas health providers define their customers as the patient and see through the lens of a subset of the population and often across multiple places. This is an important distinction that demonstrates how important language can be and ultimately how this can influence decision-making.

If we are to truly achieve the aims of the Long Term Plan and the goal of integrated care as set out in the white paper, then the NHS will need to pivot its language and lens from the passive term of ‘patient’ to the more active term ‘citizen’, not least as the definition also perfectly encapsulates the intention of the legislation.

Thinking in terms of the citizen is not an entirely new concept for the NHS. When foundation trusts were established in 2003[2], they were set up as public benefit corporations. Members had to be drawn from the public who lived in specified areas defined as a ‘public constituency’ which was aligned to the local government electoral areas. If this approach regained primacy, then the consideration of place and the role of citizen could also start to become the NHS lens. This could enable meaningful engagement with the population, improved collaboration of all health and care partners and overall better aligned decision-making for the benefit of all. 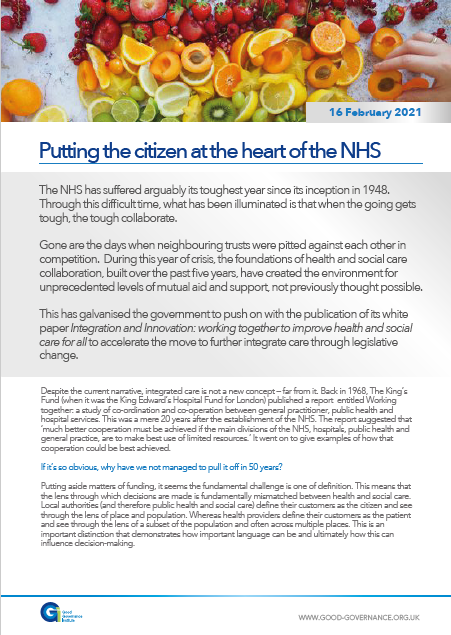