The value of anchor institutions has been explored well by the Health Foundation in recent months.  Its report, Building healthier communities: the role of the NHS as an anchor institution, sets out the positive social and economic impact of large, public sector organisations.

The term ‘anchor’ refers to the permanence of these organisations and their significant stake in a geographical area, linked to the wellbeing of a local population.

Perhaps it was an early sign of the complexity of this topic when one CEO at a GGI event dismissed anchor as an unhelpful metaphor as it was associated with not moving anywhere rather than moving with agility, and with creating a negative drag along the bottom, rather than positive forward momentum.

We see the integrated model as a genuine opportunity to transform civic stewardship for the long-term benefit of local people. The potential is there to create and work to a vibrant integrated civic agenda that encompasses sustainability, public protection, fairness and justice, and health and wellbeing, where citizens are kept front and centre of decisions about assets, resources and ownership.

But if the model is to deliver on this huge potential, we must examine the mindset and the power balance at the civic or place level between anchor institutions and the wider system.

First, though, it’s useful to distinguish between the different types of anchor organisation.

‘Big beast’ anchor organisations are significant bodies that are largely not-for-profit, tax-funded and geographically committed, such as universities, hospitals, local authorities, fire and rescue, and the police.

By their very scale these big beasts can leverage employment, skills, local goods and services and the use of estate and land. In the current climate they can also be anchors for hope and opportunity, connecting people and growing local resilience.

These organisations have also established themselves as creating real value in the place landscape, especially in the last nine months. They rely on community assets rather than state resources and require leadership skills based on deep connectivity to communities and knowledge of local citizens. We should also not forget private organisations with social purpose and impact.

The dynamic between systems and anchor organisations of all sorts should be seen as critical in the new landscape, not least to ensure the opportunity for transformative change is not lost in internal NHS politics – at both a local and national level. It must also create new and sustainable models of public value delivery that make sense to the public, and distribute power and resources to where they will have the most impact.

The dynamic must also be tested in terms of whether there are local decisions that are made without control by tax-funded bodies. This could be anything from participatory budgeting to new ways of thinking about where Treasury money goes and what accountability for it looks like.

We know that our existing system for distributing Treasury money is elaborate. That needs to move in the opposite direction and look at what the assets are locally and how they might be best welded together by local people. The system must be reframed with public outcomes at its heart. But there must also be integrated reporting – one of the most important signs of really good governance – to the public that goes beyond projects, networks and partnerships into something concrete.

The current picture is complex and muddled. It is not explicit or sufficiently explored but the potential to do the right thing is enormous.

There are overlaps in the purposes and desired impact and outcomes of organisations that no one truly understands. There are different levels of trust and agency with and within local communities and huge disparities in organisations’ power, scale and social and economic leverage. Organisations’ expectations of each other are rarely captured beyond partnership models, which are themselves overly dependent on being present.

Also, despite the significant pooling of expertise and ideas that have already taken place, the associated movement of resources – both financial and human – required to make those ideas work is less apparent. This might also be associated with the final point: that there is a conflict of interest for leaders between anchor institutions and ICSs that are certainly not going to get any easier. And there’s a lack of clarity or inconsistency about the role of non-executive directors in system and relationship development – and that’s in nobody’s interests.

We see six totems of the future for anchor institutions and ICSs.

When we talk about integrated care we all use rhetoric that places ‘citizens at the heart’ of our plans. It’s an important part of our collective narrative but is it measured and reported on by citizens themselves?

Secondly, do we really understand what asset-based community development really means? It has been around for long enough for there to be many examples of why it matters and what are the conditions for success. Some investment by the big anchor organisations to make sure it’s properly understood, captured and distributed would be a positive sign.

It’s worth revisiting the conscious transfer of power and financial and human resources here; another sure sign of progress would be a clear sign that this has visibly happened.

The fourth totem will be high-impact decisions for local people being made without control by the ‘big beast’ tax-funded organisations; so power and trust being consciously given away – which of course will result in earning more trust back.

Fifth will be the impact measures and integrated reporting beyond projects, networks and partnerships.

Finally, we’ll know we’re making progress when we see the control and ownership by local communities of more assets that actually matter to them.

If we see these developments over the coming months and years, we can be confident that anchor institutions of all types, together with the ICSs they are part of, are moving solidly in the right direction. 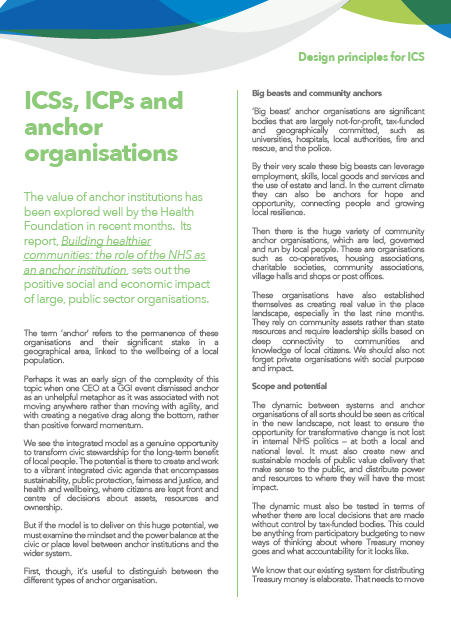