Addressing the risk of moral injury

King’s College London recently published the findings of a study examining the impact of the COVID-19 crisis on frontline intensive care unit (ICU) staff. The results suggest that nearly half of ICU staff are likely to meet the threshold for PTSD or severe anxiety during the pandemic.

The lead author of the study, Professor Neil Greenberg has warned that “the severity of symptoms…identified [through the research] are highly likely to impair some ICU staff’s ability to provide high quality care as well as negatively impact on their quality of life.”

Chris Hopson, CEO of NHS Providers, has similarly warned of the risk that, as a result of the intensity of working through the pandemic, many staff go on long-term sick leave or quit the NHS altogether. Sarah Jane Marsh, CEO of Birmingham Women’s and Children’s Hospital NHS Foundation Trust has said that: “there can be no service recovery without people recovery”.

Although many of the key drivers of staff burnout are obvious – principally being asked to work intensely over a sustained period in highly a highly traumatic environment – one perhaps less explored contributory factor for the high rates of mental ill health among frontline NHS staff is the increased experience of moral injury.

What is moral injury?

Moral injury refers to the intense psychological distress which can follow the taking of actions, or inaction, which strongly clash with someone’s moral or ethical code.

While moral injury has recently garnered significant attention in a healthcare context, it is not a new term and is more often associated with the Armed Forces, where its impact has been well-documented.

As this explainer shows, it typically occurs as a consequence of one of three things:

1. Acts of commission – when an individual does something that they should not have done. In a healthcare setting this might be malpractice leading to patient harm.

2. Acts of omission – when an individual feels that they should have done something that they did not, for example having to prioritise certain patients over others.

3. Betrayal – where an individual feel betrayed, often by a manager or more senior person. An example of this might be staff feeling they are not being provided with adequate PPE.

The pandemic has increased the frequency of such events. For example, GPs have criticised the recent government and NHS England decision to delay the second COVID-19 vaccine as a breach of patient consent and argued that it has put them at risk of moral injury.

What can boards do?

Boards will of course want to ensure that they fully understand the implications of this major risk factor for their workforce and the quality of care being provided.

Last April we noted some of the measures that boards were beginning to take. This included the establishment or revamping of people and ethics committees and the development of system-wide responses including local government and other key workforces.

However, what is clear from the King’s College research is that the battle is far from over. Moral injury is not well understood in NHS circles so there is a significant risk that staff do not recognise the symptoms which can impair treatment outcomes.

There are important lessons that can be learned from the military sector. For example, Forces in Mind Trust and King’s College London have recently begun to look at the potential wellbeing implications of exposure to morally injurious experiences during military service. Their emerging findings explore some of the wider impacts of moral injury on health and wellbeing, the danger that it can be missed when assessing psychological wellbeing, as well as a number of ways staff can be supported.

A key output from the work is the development of The Moral Injury Scale (MORIS) which, if validated, will be the first of its kind to help with the identification of moral injury in staff.

Last summer, sickness absence rates among NHS staff in England hit their highest levels in more than a decade and while official figures have not yet been released, we know anecdotally that absence rates soared again during the winter.

Perhaps most worrying is that we now know – where previously we just suspected – that the impact of COVID-19 on NHS staff will linger long after the vaccination programme is completed and the virus under control.

We would commend that NHS leaders explore this and the wider research around moral injury when considering how to address the significant workforce issues that the sector faces.

This is an issue which GGI will be exploring in more detail. We are in the process of establishing an online resource centre for research and best practice examples of response to key people and workforce related issues, which will be launched in the next couple of months.

If this Illumination prompts any questions or comments, please call us on 07732 681120 or email advice@good-governance.org.uk. 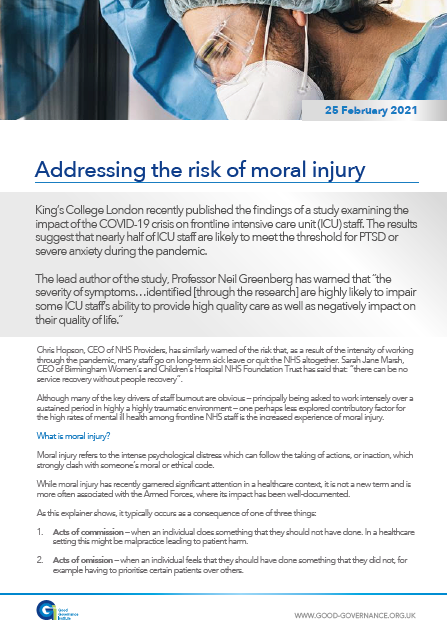