Who needs a legal personality – be careful what you wish for…

You may not realise, but if you’re an NHS trust then you’ve got one.  You’ve actually only had your legal personality since the 1990s.  For the first 30 odd years of its existence the NHS was a much more centralised, top-down organisation running on what was described as consensus management – between politicians, clinicians and institutions.

The changes to how the NHS came to be organised with trusts, managers, boards and competition began in 1983 with Sir Roy Griffiths’ letter to Norman Fowler, then Secretary of State for Health which led to the appointment of an NHS Chief Executive and established the principle that decisions would be taken by a multidisciplinary team of managers and clinicians.  Six years later the internal market and the purchaser-provider split arrived and then from the same White Paper, Working for Patients, came the first trusts and then today’s regulated and licensed environment.

This is of course a gross simplification but for the purposes of this blog, sets the scene.

A legal personality means trusts can enter into contracts, sue and be sued, raise money, employ people and govern themselves.  It also means they are subject to competition or anti-trust law so must not indulge in anti-competitive behaviour or threaten the competition through merger or acquisition.  Commercially, competition is “good“ as it promotes market awareness, delivers higher quality for the same price, increases consumption, differentiates providers, increases efficiency and customer service and satisfaction – all of which resonate within the NHS as better outcomes, greater efficiency, higher safety and quality standards and patient choice.

But you can’t have one without the other so whilst trusts might like the freedom their legal personality gives them, they can’t avoid having to deal with the competition consequences so the proposal in the recent consultation on legislative change to take the NHS out of the Competition and Markets Authority ambit was generally welcomed.  Many like the idea that regulation of the NHS by the NHS will be better for patients and users.

I wonder? It seems to me that if you accept that those who know what’s right locally are those who live and work locally, then one of the real triumphs of recent policy has been the increased local autonomy and devolved decision making by trusts or foundation trusts, the latter with the involvement of local members and governors.

There has been a worrying recent recentralising trend – control totals, deployment of capital, Non Executive Director (NED) appraisals, NED remuneration… Isn’t the removal of third-party involvement in competition, one of the legs on the trust stool, merely a further tug towards the centre running the risk of further loss of local control?  We could find ourselves with the centre making decisions whilst accountability for delivery, quality, standards and outcomes remains local – a perfect storm of responsibility without influence.

A huge benefit from the purchaser-provider split was the introduction of outcome measures whose improvement should lie at the heart of every healthcare organisation.  But if you are not the heart of your organisation because you’ve lost your legal personality – will it be?

Roy Griffiths’ 1983 letter suggested “…if Florence Nightingale were carrying her lamp through the corridors of the NHS today she would almost certainly be searching for the people in charge.”  On the same walk in 2019, she might just encounter somebody trying to blow out the light on her lamp.  Be careful what you wish for! 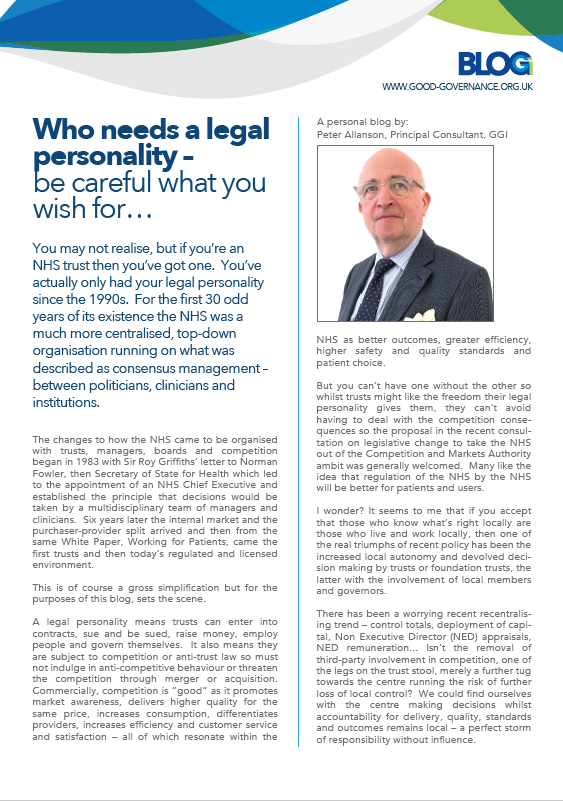