Waking up to bias

Given the recent government decision to scrap implicit (or unconscious) bias training for civil servants in England, you may be forgiven for thinking that implicit bias was no longer a significant issue in the public sector. But you would be wrong.

Analysis suggests that in 2018 white applicants were nearly 15 times more likely than their BAME peers to be awarded a place on the civil service fast track scheme.

And in the NHS, data from the 2019 Workforce Race Equality Standard demonstrates that white applicants were 1.46 times more likely to be appointed from shortlisting compared to BAME applicants. Only 15% of NHS trusts offered equal or better opportunities for BAME applicants, reinforcing that this is an area requiring considerable attention.

The government has been challenged by prominent campaigners and unionists to set out the steps it will take to replace implicit bias training. Garry Graham, Prospect’s deputy general secretary, for example, stated that, although “there is a debate as to the effectiveness of unconscious bias training, simply scrapping it without setting out alternative ways to combat discrimination in the work place is not acceptable.”

Why boards should take steps to address bias

While there is an obvious moral imperative to address such issues, research demonstrates that recognising implicit bias and embracing diversity of all kinds can also lead to improved organisational performance.

McKinsey’s Diversity wins study, for example, reveals that companies in the top quartile for gender and ethnicity outperform those in the bottom quartile by 25% and 36% respectively. The impact of diversity also extends to performance in the boardroom, with recent research demonstrating that more diverse boards achieve improved performance compared to their less diverse counterparts.

Writing in the Harvard Law School Forum on Corporate Governance, Adrianne Trainor and Byron Loflin highlight the range of ways that a lack of diversity and implicit bias inhibit good governance and effective board practice, by creating boards in which:

To prevent such issues, Trainor and Loflin argue that boards must take individual and collective actions. However, this is easier said than done. Confronting a lack of diversity can be uncomfortable and challenging. It has been shown to increase workplace friction, forcing individuals to work harder and to confront their assumptions in order to succeed.

What should be done?

In the absence of focused implicit bias training, what steps can boards and leaders take to limit biased thinking?

As a first port of call, we would recommend reading GGI and Diversity by Design’s 2017 report Diversity: The New Prescription for the NHS. In particular, the report highlights how important it is for board members to first acknowledge that they do have biases, and then to commit to mitigate these through deliberate and meaningful action.

The significance of this initial step should not be underestimated. Sue Hill, writing in a blog published by The King’s Fund, talks about the challenge of leaders building their capacity for working with difference and of: ‘letting go of being the expert, valuing feelings and experience as highly as knowledge, being humble enough to recognise our own part in prejudice and societal norms, inviting and listening to truths, and being curious and open to challenge.’

Beyond this, focused independent board development and training programmes can also support improvement in this area. Through effective facilitation, evidence-based research, and the sharing of best practice, they can help board members to recognise and confront their biases, and agree clear actions to address them.

Whatever route the board ultimately takes, each member must be prepared to face up to some uncomfortable truths and commit to take the necessary steps to address these.

This is an issue that GGI feels strongly about. We work closely with a number of prominent organisations to further thinking in this space, including The Seacole Group and Equilibrium Mediation, and will shortly be updating our guidance on diversity and inclusion.

We are keen to hear your views. If this Illumination prompts any questions or comments, please call us on 07732 681120 or email advice@good-governance.org.uk 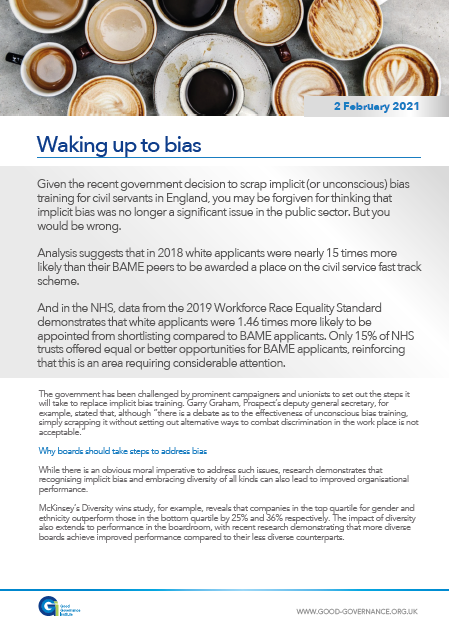