‘People who are homeless are not social inadequates. They are people without homes.’ So said the late Scottish trade unionist, social activist and director of the homeless charity Shelter, Sheila McKechnie.

The United Nation’s Global Goal 11 calls for societies to build sustainable cities and communities and that includes access for all to safe, affordable housing. And yet in some parts of British society there persists a stubborn reluctance to see the elimination of homelessness as legitimate objective of public policy. While the efforts made in the UK to protect people from homelessness in the early 2000s show how much is possible, those efforts have faltered and evidence is increasing that thousands of people are still losing their homes.

Then came the COVID-19 pandemic.

The homeless are particularly vulnerable to the virus. Living on the streets makes it pretty much impossible to adopt the hygiene practices required to limit risk of exposure and many hostels providing temporary accommodation could only become Covid-secure by reducing their capacity.

Campaigners had praised the UK’s government’s action on homelessness earlier this year, but now say that action needs to be continued. Last October, 18 charities signed a letter to the government saying that the Everybody in scheme, which saw almost 15,000 rough sleepers housed in temporary hotels during the height of the pandemic in April, needs to be renewed this winter.

Since those efforts progress has faltered and people are going back to rough sleeping or are experiencing other forms of ‘hidden homelessness’ such as staying in temporary hostels or sofa-surfing.

With protections ending for hard-pressed renters and the newly jobless, about 230,000 people are at risk of becoming homeless, according to recent research by national homelessness charity Shelter.

Jonny Webb, a researcher on housing and homelessness, told the Guardian that there is data to back up these concerns, adding that despite a 69% fall in people being evicted this year compared to last year, people were still being evicted either because they don’t know their rights or because bailiffs are still being called on people in defiance of the notice period policy.

Webb added: “This idea early on that the government said they had eradicated rough sleeping, that is definitely an overreaction especially when you look at reports showing those taken off the streets are now starting to slowly trickle back.”

In this context, NHS boards and leaders across the public and third sectors might reasonably ask what can we do?

A role for ICSs

GGI believes this is an issue where there is huge potential for integrated care systems to focus their efforts and make a real measurable impact. After all, isn’t meeting the needs of the homeless everybody’s business? Acute hospitals have an interest in reducing avoidable admissions (the homeless are often make a disproportionate use of acute services); unfortunately the homeless often have underlying mental health and substance misuse problems, so mental health trusts have a real material interest in improving the lot of homeless people; local authorities have a duty to support the homeless and work to minimise homelessness; and the hard-pressed police service have resources tied up in dealing with the homeless that could be deployed elsewhere to greater social benefit.

And yet GGI’s work with ICSs has rarely identified homelessness as a strategic priority. Surely at a time of national emergency prioritising work across a system to meet the needs of these uniquely vulnerable citizens should be front and centre of every ICS plan.

It is surely unacceptable that this isn’t always the case. In our work with ICSs we are helping organisations to come together and focus on the needs of their citizens in ways that haven’t happened before, including genuinely joined-up decision-taking, citizen engagement and holding each other to account. 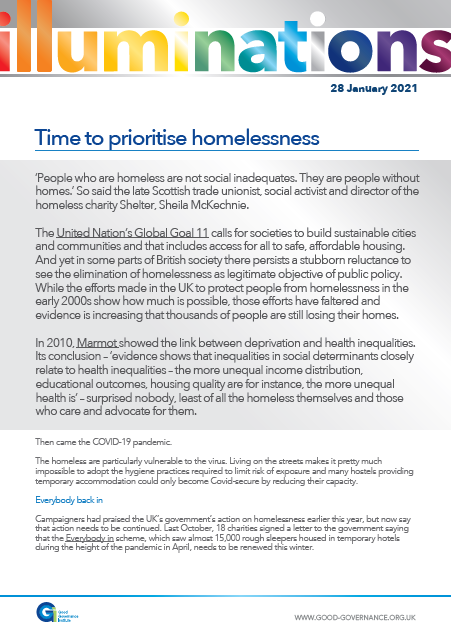