The precautionary principle in action

The precautionary principle is an approach that urges caution about innovations that have the potential to cause harm when knowledge is incomplete. But we argue that there has been a place for rapid, early innovation during the pandemic – and it might serve us well as we look ahead to the era of integrated care.

The precautionary principle is an approach to new ideas and innovations where there is the potential for harm to be caused due to a lack of scientific knowledge. The principle urges caution before trusting and moving forward with innovation.

The principle is often illustrated by the graphic of two frogs in a saucepan of water over a flame, one saying “we will get out when you prove we will be boiled alive” and the other saying “we should get out until you can prove we won’t!” The art of good governance is about not ending up in hot water.

Some see this as an important form of protection for things as important as human life or the environment. Others, including the European Parliament Think Tank, argue that it is an unscientific obstacle to progress. So, which is the right approach?

Given the speed at which the world has moved due to the pandemic, organisations and governments have had to innovate to survive. Much of this innovation has been to save human lives. In many cases the precautionary principle has gone out of the window.

Several European countries including France and Germany recently suspended use of the Oxford-AstraZeneca vaccine following uncertainty over suspicions that it could cause blood clots.

Until this suspension, the development and approval of vaccines had worked at pace across the world. It is only 18 months since the first case of the virus and a little over 12 months since it was titled a pandemic. Vaccinations have been approved because evidence has been built of their efficacy and safety, but without some of the longer-term testing we might expect with other controlled drugs.

It was brave innovation that brought vaccination to the masses so swiftly, so was the precautionary approach adopted in some parts of Europe appropriate? As the UK continued to use the vaccine, were we being reckless? We think not.

Sir David Spiegelhalter, an eminent statistician based at Cambridge, says deep vein thromboses (DVTs) happen to about one in every 1,000 people per year. Among the five million Europeans being vaccinated per week with the AstraZeneca vaccine there have been about 30 ‘thromboembolic events’ – rather fewer than the average without the vaccine.

The precautionary principle can be a useful tool when needed to make a decision in a situation that includes risk and uncertainty, but in this instance it appears to have been misapplied.

GGI and the Seacole Group

In April 2020, the Intensive Care National Audit and Research Centre revealed some alarming statistics suggesting that COVID-19 was having a disproportionate impact on non-white patients. As we reported in one of several bulletins we issued on this subject, this worrying trend had been discussed at one of GGI’s weekly Governance in times of crisis webinars for non-executive directors.

The evidence was by no means comprehensive yet but we immediately advocated for action, saying at the time: “The evidence might still be coming in and the picture may not yet be complete but the time for action across the NHS – at local and national levels – is right now.” We teamed up with the Seacole Group of NHS non-executive directors from a BAME background, hosting regular webinar discussions with them and adding our voice to the call for greater non-white representation on NHS boards. We also kept writing on the topic in our Covid-100 series of bulletins.

We also provided advice for boards and staff: “now is the time for local staff networks to challenge their boards on these issues via engagement with chairs… Boards should be scrutinising their board assurance frameworks to establish whether COVID-19 risks with a clear and specific dimension to the issue of BAME staff protection is also covered. This is also about BAME patients so a similar challenge should be put to the boards for the patient communities.”

Over the following weeks and months our voices added to many others and helped keep the issue in national focus, whilst the evidence developed. In June Public Health England (PHE) issued a report, Disparities in the risk and outcomes of COVID-19, observing that Asian, Caribbean and black ethnicities were up to twice as likely as white Britons to die if they caught COVID-19. More evidence followed.

In this case, as with so many others during the height of the pandemic, a more cautious approach would have cost lives. We are proud that we acted immediately and would certainly do the same again.

The pandemic has turned life on its head over the last year. Boards across the public, private and third sectors have had to make decisions at pace, with extreme uncertainty about what lies around the corner. What this has enabled for many is positive change and innovation, without the red tape of 2019 and before.

A few weeks ago GGI ran an event with the Association of Mental Health Practitioners (AMHP) where one of the common positive themes was that the pandemic has allowed organisations to focus on improvement at pace to meet demand. Innovation and new thinking have been allowed to move forward without some of the precautions that might usually be applied.

Good governance includes having the right systems in place to provide assurance, but where organisations can learn from the pandemic on innovation they should. Governance should be lean and agile rather than acting as a bureaucratic hindrance.

Good leaders know how to balance the safeguards of the precautionary principle with the urgency of getting things done under extreme circumstances. They know they must be ready to account for their actions. Once the pandemic is behind us, the temptation will be to revert to old ways but we would suggest that the spirit of rapid innovation engendered by the pandemic will serve us well as we look ahead and think about ways to redesign our NHS for the new era of integrated care. 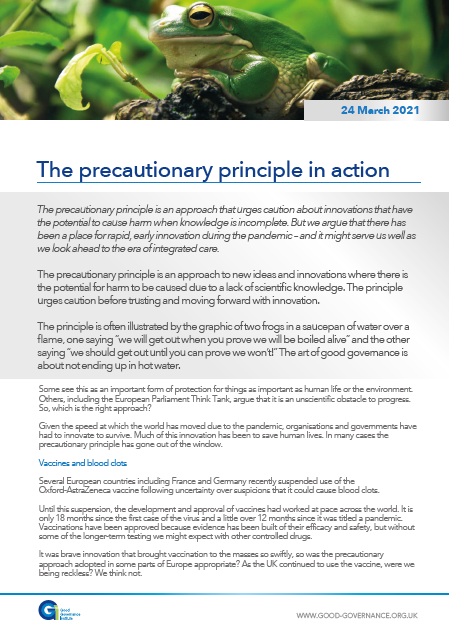