The language of leadership

President Joe Biden’s inauguration speech was a great lesson in the careful choice of words – the language of leadership. Part of being a leader is to inspire people to do great things in uncertain contexts. The job of leadership communication is to engage people and inspire them to fix issues, meet challenges, implement strategies. As any good leader knows, language is key to achieving this.

Aristotle believed that the language of leadership comprised three crucial elements: logos, pathos and ethos – or what you say, how you say it and how you make people believe it. Logos, which means word in Latin, is all about this careful choice of words and the mindset we apply to choosing them. It is the process of thinking about language, reading situations and applying shrewd observation to find the best words. For some leaders this is instinctive, for others it is learned and must be honed. Crucial to logos is asking the right questions at the right time in the right way.

When you view a transcription of Biden’s speech, it doesn’t look unlike a Shakespearean sonnet. It was delivered in short sentences with a single point. In an active voice. It spoke to everyone and everyone could understand and remember it. It was clear and precise. Plain English.

At GGI we understand the power of plain speech. We don’t just write for our knowledgeable, expert audience. We try to go beyond that and express ideas in the kind of language they themselves can use to plainly explain things in their own organisations.

Shakespeare’s Henry V is a retelling, a re-imagining of The Famous Victories, an enduringly popular telling of Henry’s famous victories in France. In Henry V, Shakespeare uses a Chorus to speak directly to the audience in the opening monologue, explaining that this play is different to its predecessors – that they can expect something new. It promises a vision of a better play, a new vision for Elizabethan theatre.

But there is a stipulation: this will only be successful if audience members buy into it and play their part. And to do so they must want to be convinced of the benefits. Shakespeare understood that the key is to give everyone a part in the story. To do this, leaders must understand their audience. They must be able to relate and speak to them; make them feel heard and included.

When Joe Biden took to the stage outside the US Capitol building to deliver his inaugural address on 20 January, the socially distanced crowd facing him must have seemed a symbolic metaphor for the deep disunion and division across America. But a reassuring sight lay just beyond them: the memorial of a man who faced a much more significant challenge of disunion, much greater division, at a far more precarious time in American history.

Abraham Lincoln brought about a more perfect union at a point of even greater threat to that union than Biden faces. As the Confederate Army of Northern Virginia met scrambled Union soldiers at Gettysburg, it was Lincoln’s words that were the Union’s greatest weapon. Lincoln is regarded by many as the greatest US president alongside Washington. His superpower was effective communication.

Now is the winter of our discontent

Just as Shakespeare’s Richard III used language to engage us with his dark strategy in his famous monologue, Joe Biden used the language of leadership to imbue in people’s minds a hopeful vision of the future, making it tangible. We choose to follow those who paint compelling pictures of what could be. Language is the link between the observable present and an ideal future. Aristotle’s pathos is all about passion and compassion; giving people hope, inspiring them and showing you care about them.

There are lessons here for all of us. The best leader isn’t the one who shouts the loudest, it’s the one who – just like a Shakespearean character in a closing scene – brings together the diverse strands of a story, sequencing different opinions, recognising each of the ‘players,’  creating a new narrative of a  complex, nuanced but unified message.

Being able to set out an idea of a desired future state and outline how to get there, making people believe in that future, want it and understand their role in reaching it, is central to the language of leadership. Boards and chief executives leading transformation programmes, developing and successfully delivering strategy can learn from this.

Speaking just 14 days on from the storming of the Capitol, Biden reminded us, in 2,514 carefully selected words, about the transformative, unifying power of language. He did so, as Lincoln had, by outlining a vision of a better future, contextualised by the pressing challenges of the now; putting us all, and our actions in the middle, calling on us to be the difference. The result: belief, hope.

In the heart of a winter of discontent, Biden has us believing in a glorious summer to come. 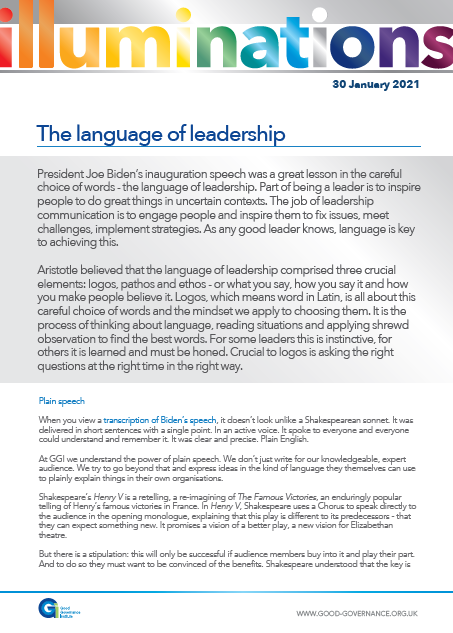