Severe mental illness: what all NHS boards need to understand

Mental health problems are among the main causes of overall disease burden in the UK. In England, an estimated 551,000 people have a severe mental illness (SMI) and experience stark inequalities. On average, they die 15-20 years earlier than the general population.

National programmes such as the Getting It Right First Time (GIRFT) Mental Health – Adult Crisis and Acute Mental Health workstream,  have focused on improving access to mental health services with a view to early intervention, best practice pathways and reducing costs. However, challenges around delivery of evidence-based care, social exclusion and access persist. We also know that performance varies across mental health and primary care providers.

What is a severe mental illness?

The term severe mental illness refers to those people with psychological problems that are often so debilitating that their ability to engage in functional and occupational activities is severely impaired.

The burden of mental illness is particularly concentrated among those who experience disability due to SMI. Bipolar disorder and schizophrenia are the most common severe mental health problems in the UK – around one in every 100 people will have a diagnosis of either bipolar disorder or schizophrenia in their lifetime.

While many of those who have SMI do receive treatment (for example, four-fifths of those identified with psychotic disorder are treated) there is significant variation nationally in terms of treatment type and quality, as well as access to services.

The prevalence of SMI is strongly associated with deprivation. It has been demonstrated that the risk of psychotic disorders is nine times as high in the bottom 20% of household incomes compared to the top, and 15 times more prevalent amongst the homeless than the general population.

Certain communities also appear disproportionately affected by SMI. For example, the risk of psychosis in black Caribbean groups is estimated to be nearly seven times higher than in the white population.

Those with SMI also tend to have poorer health outcomes. Public Health England reports that people aged under-75 in contact with mental health services in England are more susceptible to obesity, diabetes, asthma, chronic obstructive pulmonary disease and cardiovascular disease (CVD) than those in the general population. Death rates for respiratory disease and CVD are 4.7 times and 3.3 times higher respectively. Sadly, much of this is avoidable. As many as two in three deaths from physical illnesses can be prevented for people with a SMI.

The consequences of not acting on SMIs then are clearly significant. Beyond the very real personal costs for individuals, their families and carers, there are also substantial service and societal costs.

The annual cost to the NHS of caring for those with bipolar disorder has been estimated at £342 million (2009/10 prices). An earlier study estimated that the cost of caring for those with schizophrenia was as high as 2.8% of the total NHS budget. There are also rising costs associated with unlawful detention under the Mental Health Act, both before and during COVID-19.

However, we know that early and proactive intervention can meaningfully improve the quality of life for people with SMIs while reducing the financial burden. For example, it has been shown that for every £1 spent on early intervention psychosis teams that work with young people in their first episode of schizophrenia, £18 is saved. Interventions are often effective and the sooner people are able to access treatment the better outcomes they will be able to achieve. About 25% of people who suffer an episode of schizophrenia will go on to recover completely without any further problems within five years.

It is likely that this picture will be worsened by COVID-19. The Centre for Mental Health have suggested that those with existing mental health difficulties and risk factors for poor mental health are likely to be affected disproportionately by the pandemic. They have also estimated that COVID-19 could lead to an additional 500,000 people experiencing mental health problems and an increased risk of suicide.

As a consequence of COVID-19, the government has passed emergency laws to allow it to amend the Mental Health Act, ensuring that it is able to operate effectively through the crisis and with a reduced workforce.

Key changes to the Mental Health Act relate to the detainment of patients now include:

Amendments to the Mental Health Act have been criticised by a number of organisations, including Human Rights Watch.

It has been argued that removing safeguards, such as the requirement of a second opinion for individuals forced to take psychiatric medication, may be in breach of Article 8 of the Human Rights Act, which covers the right to live privately and without government interference.

It is also likely that weakened detention safeguards will disproportionately impact BAME people in our communities. Indeed, a 2019 independent review of mental health legislation found BAME people are overrepresented in detention, have longer than average lengths of stay in psychiatric hospitals, and are eight times more likely to be subject to involuntary outpatient treatment.

We are keen to hear your views. If this briefing prompts any questions or comments, please call us on 07732 681120 or email advice@good-governance.org.uk. 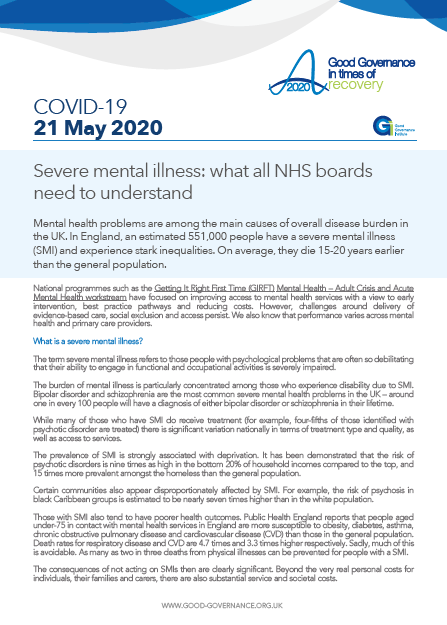