Learning from the German long game on social care

When Germany won the football World Cup in 2014, much was written about the seeds of the team’s success having been sown more than a decade earlier, following an ignominious departure from the 2000 European Championships.

At the heart of their success was said to be a heavy investment in footballing academies and coaching, which produced the generation of skilful, creative players who ruled the world in 2014.

It’s a great story that perhaps doesn’t quite stack up – Germany were runners-up in the 2002 World Cup and did pretty well in the intervening years too. But it does highlight a national characteristic for which Germans have long been renowned: planning ahead.

It’s a trait that German Chancellor Angela Merkel could justifiably claim as a trademark of her 16-year tenure. Even as she prepares to step down later this year, she is demonstrating it by urging her EU partners to consider a European health union to integrate services more closely across the continent.

Mrs Merkel has also played an important part in sustaining German social care reforms that began in 1995, a full decade before she became Chancellor. As the UK moves into the era of integrated care, we should ask ourselves what lessons we can learn from the German long game on social care.

Germany’s long-term care insurance system (Pflegeversicherung) was a radical attempt to address the same familiar challenges that we face in the UK: the rising cost of care for an ageing population with ever-more complex needs.

Benefits are funded by mandatory contributions from all employees, who pay between 3.05% and 3.3% of their salary into the scheme. Provision focuses on benefits that keep people out of hospital, improve home care and ease the burden on family carers.

A 2019 Nuffield Trust report outlined the principles that lay at the heart of the reforms:

These are solid foundations on which to build a social care system. But Germany has had to negotiate many challenges and obstacles on the road to reform. And it is arguably only because of the country’s consistent political leadership that the reforms were successfully implemented. It is perhaps here that the differences between Germany and the UK are the starkest.

Lessons for the UK

The Nuffield report highlights some lessons that UK politicians, as well as health and social care leaders, could usefully learn from the German experience.

The first is the need for cross-party cooperation. The report says: “Social care transcends party politics and debate needs to be taken out of the political sphere. […] With a unified approach, social care reform could be seen as a positive narrative rather than politically divisive.”

There is also a balancing act to strike between what costs the state will meet versus those that the individual is expected to pay themselves. The first step is to be clear about where one ends and the other begins, as well as being honest and pragmatic about where these funds will come from.

Perhaps most pertinently of all, the German social care system was always intended to look beyond merely funding and service provision towards a more sustainable long-term vision. It’s about enabling people to remain independent for longer in inclusive, supportive communities. That means adopting a much more holistic place-based approach to public services – and that in turn means significant investment and a new funding model.

As we prepare to say farewell to one of the most remarkable political leaders of recent times later this year, we should reflect on the benefits of the long-term stability Angela Merkel provided in Germany.

Perhaps we could also be inspired by the German example and reach beyond our usual adversarial politics in search of a unified approach to social care reform, backed up by sustainable funding. 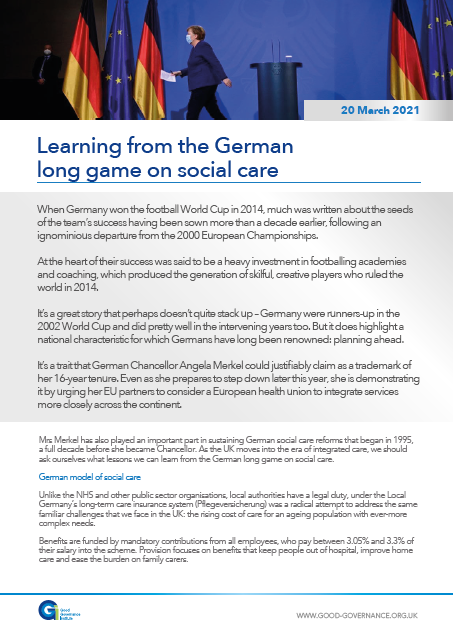