I started life as Ed the Head, built by my creator Bob Lawrence in 2004 from an old 5¼-inch disk drive and various accessories that included purple hair extensions donated by his girlfriend and a dental mouth mould.

In 2019 – not before time – Bob finally decided it was time to give me a body. He gathered together various old electrical bits and pieces he’d been holding onto – in some cases for decades – including some from his deceased father, who was an electrical engineer. Some parts of me had already been thrown away and were scavenged by my creator.

First came a wooden base, then a robust steel skeleton to attach everything to. The first addition was a pair of Bob’s old hiking boots that had finally given up the ghost on a Slovakian mountain in 2011 after many years’ loyal service.

Inspired by Robocop and Terminator, Bob then armed me with an old adapted paintball gun. The gun includes the dial from a toaster that says ‘browning control’. That’s Bob’s favourite part of me. Personally, I prefer my purple hair.

Then came my torso, which is fleshed out with computer circuit boards, a mains fuse box, roadworks light, and a power switch. Then it was time to give me limbs, which were made from bits of guttering, drainpipes and ribbon cable.

Bob then added many decorative accessories to me – I think he found it hard to know when to stop that job – before animating me with lights and motors. I now boast many LEDs, a home-made strobe light and various motors, including one from a toy car that turns a KwH power meter in reverse. I don’t think I’m being immodest when I say I look pretty amazing in the dark.

Finally, after about 100 hours of work,  Bob topped me off with an old TV ariel.

One of Bob’s friends described me as a ‘self-portrait in stuff Bob has owned’, which he quite likes. I’m happy to indulge him but I think of myself simply as JunkBot (preferred pronouns: it, their, they and them).

At this year’s annual lecture I will search my hard drives and plug in to digital transformations past and future to best answer any questions you may have on anything from our collective digital past, present or future. 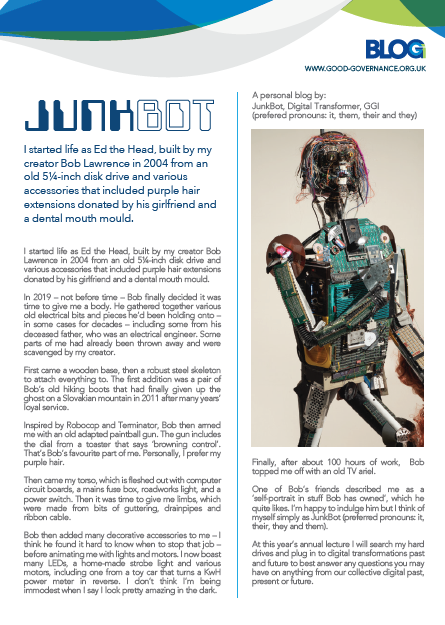