Is public voice the ultimate challenge for good governance?

Public voice is emerging as a big theme in the National Commission on the future of governance in the public sector.

But are active citizens still seen as bad news for good governance – something to be kept at arm’s length?

The purpose of engaging with public voice is also blurry. Is it to be better informed and more open (or at least appear to be) or to raise the standard of public services? Or perhaps the intent is more ambitious: to generate a new compact between citizen and state that represents a real shift in power and understanding.

Given the damage that’s been done to trust in public sector leadership and the media’s continuing delight in apparent failure, that last aim could be the very least that’s needed to secure trust in public bodies.

The lack of clarity about purpose and consequences is not surprising; this is highly political territory. Embracing public voice collides with all sorts of assumptions about representative, participative and professional responsibilities and authority. Such deep-seated issues will take time to resolve. But unless they are addressed – well and at pace – public commitments could run out of steam and may even be seen as tokenism. And if that happened, the impact on trust could be catastrophic.

The heart of good governance

Citizens (whether active and engaged, or passive and disengaged) offer diverse and challenging views. That’s why public voice has been treated as an addition to good governance rather than central to it, largely limited to gaining information or shaping services through involvement and engagement.

The time has come to consider how public voice in all its complexity might sit at the heart of good governance.

This is not easy territory. As the former NHS Centre for Involvement, on whose board I served, used to say: ‘Involvement of the public in all aspects of the NHS is always messy, it challenges some deep-seated assumptions, and yet it is matters fundamentally to how we go forward.’

A decade on, we could add something more: ‘Public organisations need to sort out robust governance to secure the positive potential of public voice and to mediate any negative consequences and do this with the citizens themselves.’

The Commission would love to hear from anyone who has evidence of where this has already happened.

The outcome of this exercise cannot be limited to what public sector leaders want. It must be about citizens determining what it is they are involved in and how. But to what degree? Answering this question will challenge leaders’ assumptions about legitimate governance structures and processes, and about their responsibilities for stewardship. It will test their risk appetite, mindset and culture.

Modern public voice must be about more than just sporadic consultations and professionally-mediated spaces. They won’t deliver improved trust. Nor will giving up responsibility for stewardship and a controlling mind obligation on governors.

A free-for-all where activist voices dominate is in no one’s interests. Nor is an approach that fails to seek out hidden voices. Stewardship demands something ongoing, built in to core governance culture and processes and credible enough to resolve strongly-held differences. Evidence and mediation, values and legitimacy are all vital.

For the National Commission, our line of enquiry centred on citizens is the most challenging of the eight we have chosen. The headline question ‘What are the most productive ways for citizens to contribute to the future of the public sector?’ might seem relatively straightforward. It really isn’t.

As part of our work for the first report, published last year, we gathered material about positive engagement and involvement and the growing body of tools being used around citizen voice: juries, parliaments, summits, participatory budgeting, co-design and co-production.

All this activity may seem encouraging but it is still largely about how organisations choose to involve the public. We could find very little on core governance questions flowing from a real commitment to public voice in which the public themselves have been involved.

There are some big questions to answer. How do different citizen and professional voices feed into evidence-based policy and decision-making? How far are public bodies really prepared to go along the spectrum of embracing public voice into governance? How are issues of the representative, the participative and the professional mediated and by whom?

In short, we must decide how good governance can contribute to a stronger, better governed public sector in which public voice is an increasingly active ingredient. The challenge of public voice requires leaders and citizens to find common ground beyond fine words or simplistic solutions. Good governance could still be the glue that holds these critical relationships of state and citizen together. But it will take more work and a lot more honesty on all sides. 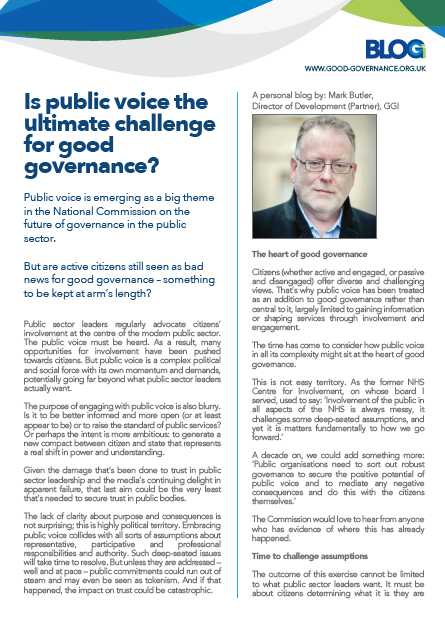