Saturday 20 June is World Refugee Day, a United Nations initiative to build empathy and understanding for the plight of refugees all over the world. The day is marked by numerous events – most of which have moved online this year due to the coronavirus pandemic.

In the UK, Refugee Week is a nationwide festival celebrating the contributions, creativity and resilience of refugees. Founded in 1998 and held every year around World Refugee Day, Refugee Week brings about positive encounters between communities, helping them to connect and learn from each other, and promoting a culture of welcome through a programme of arts, cultural and educational events alongside media and creative campaigns.

The theme of this year’s festival is imagine – because, say festival organisers: ‘when things feel stuck; when the old ways of doing things are no longer working, that’s what we need to do’.

The UN Refugee Agency calculates that there were 79.5 million people around the world at the end of 2019 who had been forcibly displaced from their homes. That’s 1% of the world’s population. This is not a problem that’s going away. In fact, it’s growing: the economic impact of COVID-19 is likely to have a profound effect on millions of people all over the world. Perhaps the need to imagine something better in these difficult times is more important than ever.

In last year’s Festival of Governance Review, we spoke to Isis Mera, founder and director of Help4Refugee Children, a network of volunteers set up to bring relief to children in refugee camps at Calais and Dunkirk in northern France. Her comments resonate today as much as they did when we published them.

“We all need help at some point in our lives. We are also often able to help someone or provide support. What we can offer is relative, but we can all find something to give. Learning to give and receive help requires good communication and empathy.

“Every volunteer will tell a different story about why they decided to go to the border between Britain and France to help. It is true to say that we were driven by empathy and compassion; most of us had no prior experience or training.

“The need of the people there was so great, and it seemed so easy to help. In retrospect it was one of the hardest things I have ever done, we were pushed to our limits both emotionally and physically.

“Building relationships in that context, with people who often did not speak English, had come from different cultures and who suddenly found themselves in a foreign country, was often a challenge. To work together we needed to understand each other; we need to make human connections at the starting point and then find people with whom to align our aims in order to deliver each project.

“Nobody is skilled enough to handle that kind of situation. It was essentially a disaster zone, where no official organisations or government bodies where operating, day-to-day, to alleviate the crisis.

“The only governance there was in the Jungle was 40 toilets for 10,000 people.

“When I first arrived at the camp, I met Haroon, a young boy who was alone. He was sweet and ingenious; he would take donations, run to hide them and then come back to see me and talk. We laughed and connected in a very sweet way; he was a charming boy.

“He made me question how many other young children were separated from their parents or alone in that dreadful place. I later came back to London and decided to fund-raise under the name Help4Refugee Children to return to the camp and provide creative art activities for children.

“We went back for two years, we built friendships with refugees, we learned their names and they learned ours, and we got to know many people in the camp. We would find children and family areas and set up on the floor on plastic mats with colours, glue, balloons, glitter, stickers and everything else we could find to create and play.

“It’s difficult to quantify the impact that play had on the children. We defined our purpose and aimed to deliver a space where they could express themselves, forget about their immediate needs and release energy by creating pictures, painting and playing.

“What I know for sure is that our activities helped to build positive relationships.

“Through their paintings, refugees sometimes told us stories about who they were and their journeys to Europe. During one of our workshops in July 2016, a girl drew the boat she’d spent three days on during her journey to seek asylum in Europe after the Taliban killed her mother. Looking at her, she does not look any different to any young person, yet it is impossible without having lived her experiences to know the depths of sorrow behind her eyes.

“While everyone’s story mattered, it also didn’t. We were not there to question people, we were not there to understand them. We also grew to be quite measured with the relationships we built, as the vulnerability of the refugees we worked with was so great. We focused on providing a space for people, where they could exist outside political and humanitarian discourses. We provided a space for self-expression and creativity, hoping that we could help to foster positive memories outside the dire context of their day-to-day lives.” 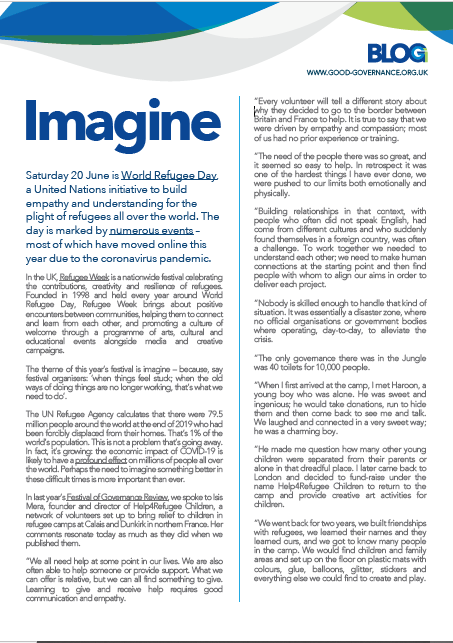