How do we improve NHS procurement? | Good Governance Institute

How do we improve NHS procurement?

We all know that the NHS is facing significant challenges – mounting demand, funding constraints, and workforce shortages to name but a few. We also know that, behind these high-profile issues, the systems and processes underpinning NHS activities are not always as effective as they could be.

One obvious example is the current NHS procurement regime, which is often criticised for increasing cost as well as being disproportionately time and resource intensive. It also arguably inhibits development of the new models of care partnership envisaged by the Five Year Forward View and subsequent planning documents by reinforcing an emphasis on competition.

The challenges faced by the NHS means there is a clear need for procurement exercises to maximise the value derived from scant resources. With this goal in mind, the NHS Long Term Plan proposed a new approach to NHS procurement, advocating the use of a ‘best value test’, reminiscent of that used by local authorities, to achieve the best possible outcomes for patients and the taxpayer.

NHS England and NHS Improvement undertook a consultation exercise, publishing proposals for change in September 2019. They  strongly supported revoking the regulations made under section 75 of the Health and Social Care Act 2012, and highlighted the need for clarity around what a ‘best value test’ would constitute.

Progress appeared to have stalled pending the outcome of the recent General Election. But now, with the election returning a significant Conservative majority, the Government has reiterated its commitment to the NHS Long Term Plan, indicating that it might introduce legislative changes soon  to support this. Time will tell, but these changes are likely to be based on the proposals published by NHS England and NHS Improvement.

To help inform this transition, GGI has been working with Connect Health to explore some of the practicalities of implementing a new procurement regime for the NHS. We will be publishing the first iteration of our report, Reimagining procurement in the NHS, which reflects on a series of engagement activities, on 5 March.

It is already evident that there is a real appetite among NHS leaders for a more permissive procurement regime. Our report describes eight challenges that will need to be addressed to ensure the success of any new procurement regime and provides a set of tools to help organisations make informed decisions about the ‘value’ of procured services.

These are the challenges we’ve identified. We expand on them in our report.

It’s crucial that, rather than starting from scratch, any proposed initiatives build on existing frameworks from local government and elsewhere. We have included practical examples of these in our report. One of them is the impressive work of Birmingham and Solihull STP, which has developed a clear social value policy linked to priority areas for the region.

The STP opted against applying a fixed weighting for social value within procurement exercises but suggested that ‘social value weightings should be a minimum of 10% to demonstrate relevance and proportionality’, adding that, over time, it would ‘like to see most organisations achieving a 20% weighting’.

We’ll be discussing these topics further at the launch of our report on 5 March, when Ivan Ellul, Director of Commissioning at NHS England and NHS Improvement, will talk about the national context of procurement, and David Hare, Chief Executive of the Independent Healthcare Providers Network, will talk about the next steps for procurement in the NHS.

The report will be available on our website from 5 March. 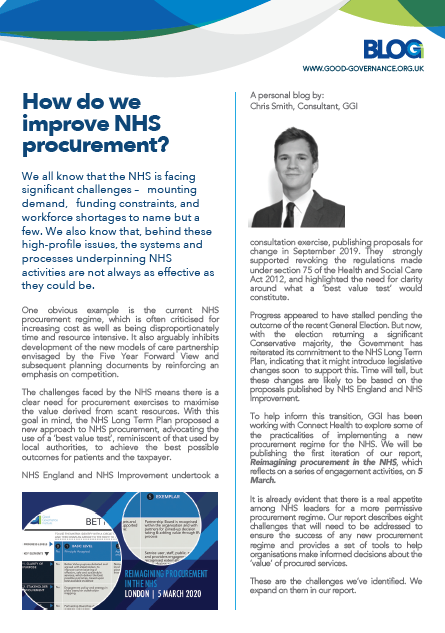