Governance challenges in the third sector

In the wake of a number of highly publicised scandals involving Non-Governmental Organisations (NGOs), Joao Figueiredo, Research Analyst GGI, takes a look at the
challenges of good governance in the third sector.

When, in last October, Indonesia ordered foreign aid workers to leave the country, the news came as a shock to the international community. Never before have NGOs been made to feel so unwelcome by a hosting government. Filling the vacuum left by the public and private sectors of the economy, the third sector enjoyed a boom in the mid-1980s and have since been in the front lines of humanitarian intervention and development.

However, the development of the sector was quickly followed by a number of highly publicised incidents involving NGOs. One of the world’s largest NGOs, Oxfam International, recently found itself in a media storm due to sexual exploitation; in 2000, the Bavarian Red Cross (Germany) was involved in an economic scandal involving bribes, fraud and tax evasion; in Liberia, one of More Than Me’s leaders, an NGO formed to protect children from sexual exploitation, was arrested for assaulting and raping children.

An American study on the allegations of NGOs wrongdoing show that most organisational issues are linked to the lack of appropriate oversight and the failure to institute and/or maintain accountability mechanisms, all problems of governance. Symptoms of Board failures often include: poor supervision of operations, lack of turnover of Board members, failure to institute controls, absence of checks and balances on procedures and practices, and the isolation of Board members from stakeholders, amongst others.

Despite growing evidence of the correlation between poor governance and misconduct, it’s remarkable how little the issue of governance is discussed among the third sector. Good governance principles, initially created to support corporate actors and then widened to the public sector, also have major significance for non-profit organisations.

Non-profits acknowledge the fiduciary responsibility of its Board members, however, lack understanding that good governance is about effective and ethical leadership. These failures can be further recognised when looking at three endemic symptoms: misunderstanding of the “governance” concept accountability gap, and structural growth issue. Moreover, much like private companies, NGOs are run by individuals, who, conditioned by their human frailty, are vulnerable to behave differently to the values of the organisation they represent.

Diversity is another major challenge of the sector. It is difficult to agree on a standard set of norms and regulations. Firstly, due to the highly volatile environments NGOs operate in, regulation should be approached with caution. Giving more regulation and control to (often undemocratic) governments can greatly jeopardise the missions and good work of NGOs. Before deciding which norms should be adopted, we must discuss who should be setting those norms.

Secondly, norms have to be country-specific, developed ‘in-country’, taking into consideration local culture and circumstances. Thirdly, there is a scaling issue. Most NGOs are small and ad-hoc, they lack specialist knowledge and the resources to develop or put in place adequate structures for regulation. These organisations often struggle with basic tasks, such as national directives and demanding reporting requirements from different donors. The NGO sector can be highly competitive and small organisations tend to ignore the appropriate frameworks and structures to focus on pressing survival requirements.

If creating one set of rules is not a long-time viable answer to the sector’s needs, we should look for answers that will address these issues without limiting and jeopardizing its work. It is here that good governance can play a major role.

Good governance does not result from quantitative compliance solely composed of codes and rules. Good governance involves fairness, accountability, responsibility, and transparency on a foundation of intellectual honesty. Boards must keep in mind that governance is a dynamic journey, rather than a destination. Organisations will always be dealing with uncertain future events potentially affected by several external factors, such as swings in a country’s economy, local politics, new United Nations directives or even the social-media revolution.

One should have in mind that the varied environments and the state o emergency the sector operates in when trying to create a structured governance approach to the sector’s many needs. Additionally, NGO leaders should be mindful that organisations cannot work in a vacuum and that good governance, when established early, sets a positive course for development. By encouraging organisational stability and balanced decision-making, Boards can testify to the integrity of the sector. Engaged and responsible governing bodies should set the standard for leadership, expressing their NGO values through their personal behaviour. 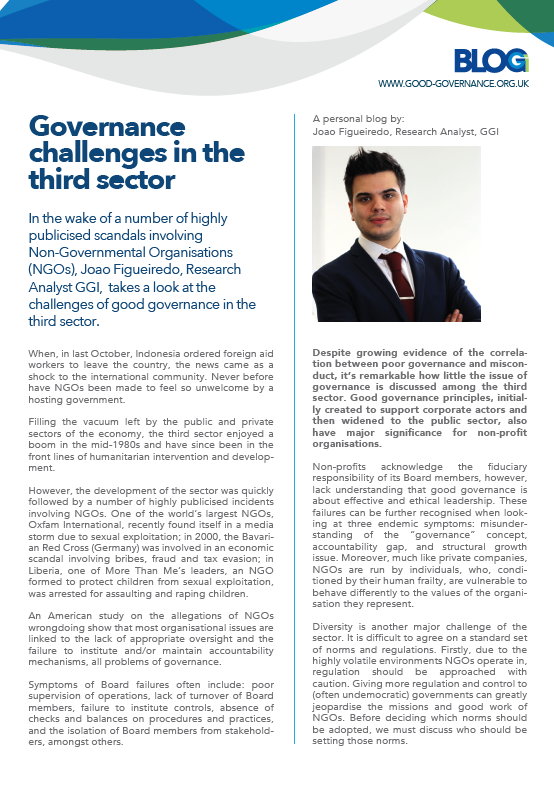