Fit enough to be proper?

Did you know that the test to become a director of an NHS trust is tougher than the test imposed on PLC directors?

Does this surprise you? Is it right?

Everybody assumes that NHS leaders are like Caesar’s wife: above suspicion, but the reality – of course – is that they are not. The Fit and Proper Persons Requirement (FPPR) exists to ensure that appropriate levels of competence, professionalism and integrity are in evidence in board appointments across the NHS.

As with a number of NHS protections, problems and disasters have given the FPPR a boost. Robert Francis’ Mid Staffs report and Bill Kirkup’s Liverpool Community Health report both led to changes and improvement. Then, a year ago, there was a major review by Tom Kark and Jane Russell, both distinguished barristers.

The FPPR’s ancient history lies in Companies Acts of bygone days. But the NHS also signs up to the Nolan Principles and any number of voluntary codes of behaviour, practice and conduct.

The basic test checks that NHS directors are not barred by the disclosure and barring service, are not undischarged bankrupts, are of good character, and have the necessary qualifications, skills and experience to undertake their role.

Kark recommended that a core set of competences for senior leaders was devised – it being relatively easy to work out what is required of a chief nurse, medical or finance director but more difficult for other roles – and a central database of directors. He suggested that there should be mandatory referencing for directors – it’s astonishing there isn’t already – and made a number of other recommendations that NHSI has been asked to include in its forthcoming people plan.

A gallimaufry of regulation

This is unexceptional stuff, although there are some questions about how mandatory a register can be without being regulatory and the gallimaufry that would accompany that. The implementation and monitoring, by CQC, can already feel excessive, as if checking the existence of paperwork would solve the problem even if it included (as it should):

The last thing anyone wants is to discourage the best candidates from applying either as executive or non-executive directors. Surely the best approach is to use the highest calibre of process and arrangement when recruiting. Psychometric and competence tests – we await Dido Harding’s assessment of competences needed – coupled to the good old interview and a reference group session.

I have found that reference groups are often one of the most powerful parts of the process. They work best with a disparate selection of senior colleagues the candidate is likely to encounter and probably involve a pre-arranged discussion point or even a short presentation to focus the conversation. Because that’s what’s needed: half an hour or so for the group and the candidate to talk. The group then offers its views to the panel; they don’t have a vote but their views should be influential.

The make-up of the panel is important too. Being able to assess professional competence may be significant in some interviews but it’s also important to test candidates’ aptitude for being a director and their understanding of what that involves and check how the individual meshes into the values of the organisation and what contribution they are likely to make. Together, these assessments are every bit as significant as the Fit and Proper Persons Requirement.

So as NHSI beavers away with its advisory group and advisors on what the FPPR really means, let’s hope and encourage them to look at a package that doesn’t separate competence from character from aptitude from attitude. To be fit and proper is a grand aspiration. Goodness knows where Julius Caesar might have got to if Cassius and Brutus had been effectively tested. 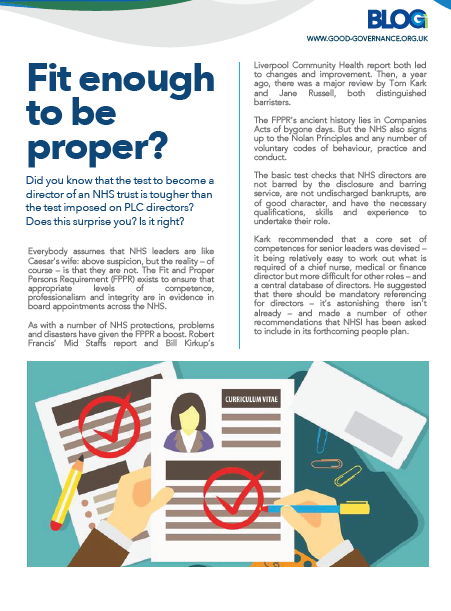