Does the NHS have a glass ceiling? | Good Governance Institute

Does the NHS have a glass ceiling?

In the UK today, there remain long-standing and systemic barriers to career progression for women. Research shows that in order to be appointed to a board, women typically need to be more qualified and, once appointed, are often treated differently to their male counterparts.

The Hampton-Alexander review, published in 2016, acknowledges this, establishing the end of 2020 as the deadline for FTSE 350 companies to voluntarily appoint women to one third of board positions.

However, as we move into the second half of 2020, more than 85 FTSE 350 companies have less than 25% of their board positions filled by women, and two companies (Domino’s and Aston Martin) continue to retain all-male boards.

The EU defines board gender parity as being between 40% and 60% men or women, a target that private sector organisations in the UK are, as a whole, a long way from achieving.

How is the NHS doing?

When measured against the European Commission’s definition, the NHS has achieved board gender parity. Even by the more stringent target that the NHS set itself of 45% to 55% women on boards by 2020, it performs well, with 43% of NHS board members reportedly now women.

However, the NHS should not pat itself on the back just yet – there is still much to be done.

First, when you consider that 77% of the NHS’ workforce is female, questions emerge around pathways to senior management and director-level posts. This is particularly apparent in medical director, director of finance and chair positions, which remain largely the domain of men. This is despite more than 60% of NHS staff working in finance and around 45% of doctors being women.

Similarly, although gender parity has largely been achieved within executive teams, women make up only 39% of NED positions and just 31% of chairs are women. This is likely a result of outdated recruitment strategies that rely on old-boy networks and also a reliance on C-suite executives who, more often than not, are men.

Finally, NHS Improvement data suggests that some 136 NHS provider boards are less than 45% female. There are also widespread geographical disparities in board representation that need to be addressed.

Worryingly, a number of organisations are also cautioning that gender equality may have moved backwards during COVID-19.

The International Labour Organisation, for example, has warned that women are being especially hard hit by the pandemic as a result of being over-represented in the most at-risk economic sectors (social sectors such as hospitality, retail and catering).

They also highlight, as others have done, that the pre-pandemic unequal distribution of unpaid care work has intensified during this period and may result in some women exiting the labour force for prolonged periods,

We know that, historically, women have had to make larger trade-offs in order to realise success in their careers, and there is a real danger that COVID-19 will exacerbate this further.

The issue might be less pronounced in health than it is in other sectors, but NHS boards still need to remain vigilant in order to guard against this and prevent the significant good recent work being undone.

Why does this matter?

The case for gender parity on boards is clear. Beyond the obvious moral imperative, we know that increased workforce and board diversity leads to greater profitability.

For example, research conducted by McKinsey has shown that companies in the top 25% for gender diversity in their executive teams are also 25% more likely to experience above-average profitability than those in the bottom 25%. And our own government has shown that reducing gender gaps in labour market participation, STEM qualifications and wages, could increase the size of the UK economy by around 2% – or £55bn – by 2030.

1. Creating a more attractive work environment – increasingly, people are looking at leadership diversity to inform decisions around where they want to work. This is particularly true of women, with a recent PWC survey highlighting that 61% of women look at the gender diversity of an employer’s leadership team when deciding where to work. If organisations do not foster diverse and welcoming work environments, or are unable to demonstrate that opportunities exist for female staff, they will miss out on top talent.

3. A diverse workforce signals competent management – investors are increasingly looking at board gender diversity as an indicator that a firm is well-run.

There is also a strong argument that boards should reflect the communities and staff they serve, so that they are best able to understand and promote a range of interests. This is especially so in the public sector where services are funded through taxation and boards are therefore accountable to the public.

How do we get there?

In a thought-provoking podcast, Julia Gillard, Australia’s first female prime minister and incoming chair of the Wellcome Trust, highlights what she believes are the three biggest issues when it comes to women in leadership in 2020.

1. The inability for women to find structures and support to help them balance work and family life.

To achieve the goal of more inclusive and diverse boards, these issues must be addressed. Increasing the emphasis placed on diversity and inclusion within regulatory frameworks would be a good step in the right direction. Indeed, recent research has demonstrates that the introduction of regulation was the single largest catalyst for an increase in the presence of women on boards.

But there are steps boards can take too. Boards would do well to consider how they measure up by discussing the following questions: 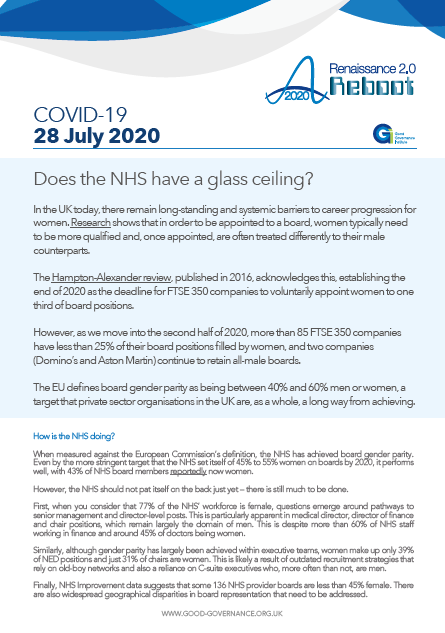