The Festival of Governance is an opportunity to connect with good governance as a cultural driver for change. During the festival’s opening week, we looked at how to improve diversity in decision-making; in week two we explored how to return human decision-making to the heart of digital system design.

Humans are inventive and collaborative creatures. The story of the end of the 20th Century and the beginning of the 21st is largely about how we used our collective ingenuity to solve problems by harnessing digital technology.

The result has been a great deal of positive, meaningful and irreversible change. But alongside all of this progress have come other changes that are rather less positive. And addressing these might just be the most important challenge facing humanity.

At least that’s the conclusion drawn by the compelling new Netflix documentary The Social Dilemma, which explores the impact on humanity of digital technology – in particular the all-pervasive social networks and smartphone addiction.

The film sets out the concerns of senior Silicon Valley insiders about the fundamental business model underpinning the major social media platforms. They say the tools that were created in good faith to improve people’s lives and personalise their online experiences are now out of control. They’re unravelling society and subtly changing what we do, how we think, who we are.

The ‘like’ button, for example, was created in good faith to make it easier to interact with others. It was meant to be nothing more than a simple tool. But in fact it has helped to build unprecedented levels of anxiety and depression, particularly among young people, whose desire for validation and popularity has been driven by – you guessed it – the social media giants.

Tools sit silently until they’re required. They don’t build an addiction that uses our psychology against us to achieve their goals. Rewarding behaviour through a like button has had the effect of creating addiction. It’s a great example of good intentions but bad governance – no one considered the corporate social responsibility of not making things addictive to people.

More integrated reporting would capture the psychological effects of planned activities – not just their monetary value. If shareholders were held more accountable they might make different decisions but they’re not. It’s all about the money. Better accountability will drive better decision-making.

It’s said about social media: ‘If you’re not paying for the product, then you are the product’. But The Social Dilemma takes this a step further. Social platforms compete for how much of our lives we are prepared to give them. The real product isn’t just our attention – it’s influencing our perception and behaviour. Where it was once humans creating digital tools, the digital tools have commodified humans and now is the time to think again.

The insiders call it surveillance capitalism; it’s a new kind of marketplace that trades on human futures at scale. And it’s made trillions of dollars for the digital tech giants, making them the richest companies in history.

The filmmaker, Jeff Orlowski, describes the issue as ‘climate change as culture’. The planet has been ravaged for decades in the name of progress – but now it’s humanity itself that’s being mined. He and most of the people he interviewed believe it represents nothing less than an existential threat to mankind.

Each person lives in their own box that’s been created by an algorithm based on what they might buy. That means the truth becomes fragmented and we lack a common understanding of where we are – and that in turn makes it impossible to collaborate.

The Social Dilemma paints a bleak picture but it also offers glimmers of hope. The Silicon Valley insiders share the view that, although we’re in big trouble, we’re not yet doomed. We created this problem and we can also solve it. But to do that we need to acknowledge its existence and then change the corrosive business model at its heart; the focus on profit and technological advance must be shifted back to people. Renaissance 2.0, born in 2020.

This idea of keeping people at the heart of digital technology has always been close to GGI’s heart. It’s a concept we visited several times in our series of 100 daily bulletins during the coronavirus lockdown period.

In our Digital assurance bulletin in June, for instance, we said that digital technology had enormous potential to improve the worlds of health and social care and that it represented an opportunity to mitigate the impact of COVID-19. But we warned: “Digital is not an IT project or a technology project, it is about people, service users and staff. Technology must be deployed in a supporting role, not as an end in itself.”

The idea also shaped the second week of our 2020 Festival of Governance, which we called digital humanism week. It was full of discussions and events looking at how to put human thinking at the heart of digital decision-making and good governance.

GGI hosted four events during the week. On Tuesday, Steps Drama ran the second of its interactive sessions, this time aiming to co-create behaviours that will help organisations to implement digital change better. Four actors became board members of the fictional West Larkingshire NHS Trust for the day to help attendees explore how leaders can better involve rather than side-line people in the design and implementation phases of new organisational digital systems to improve function as well as increase adoption.

Also on Tuesday, in partnership with Connect Health, GGI staged a special round-table event to discuss the integration of physical and mental health in relation to COVID-19 recovery efforts, particularly in the musculoskeletal (MSK) field. The session highlighted the benefits of keeping the patient at the heart of complex care systems, and provided a space to explore how our newly developed IAPT Board Assurance Prompt (BAP) can be applied both on the provider and commissioner sides of the table.

Health and mental wellbeing currently sit in two slightly disjointed systems but if we use digital tools to better integrate those systems, the way we look people’s mental and physical health will improve because – as the data from the pandemic has once again shown us – the two are inextricably linked.

Wednesday saw the first of two sessions produced in conjunction with Perfect Ward, makers of an app designed to make quality inspections easy and more efficient. The session explored using digital technology to achieve excellence in quality improvement, focusing on how Walsall Healthcare NHS Trust is embracing digital. The app allows the user – in this case the ward nurse – to define the questions, deciding what quality improvements to focus on to reflect specific needs and circumstances, thus putting the person on the front line in control.

And on Thursday, the second Perfect Ward event looked at using digital technology to reduce harm, featuring a case study looking at the way Barnsley Hospital measures and assesses the quality of pressure ulcer prevention and falls prevention through Perfect Ward audit tools.

The Social Dilemma focuses on the main social networks – Facebook, Twitter, Instagram et al – but the warnings it offers about the consequences of misused technology resonate far beyond the Silicon Valley behemoths.

They should certainly be heeded across our health and care sectors. As we said in that bulletin back in June: “Population health and a focus on wellness rather than the traditional break/fix approach necessitates a drive towards more sharing of data, information, knowledge, risk, and reward.”

Digital technology has an enormous potential to transform the worlds of health and social care. In fact, if more progress had been made with digital transformation, our response to COVID-19 might have been better. Track and trace enhanced by regional ecosystems sharing health data and being able to track/alert emerging patterns quickly might have led to a very different outcome in this country.

But in our hurry to embrace this brave new world of tech-enabled holistic care, we must take care never to lose sight of what should lie at the heart of any technological advance – and that is people. 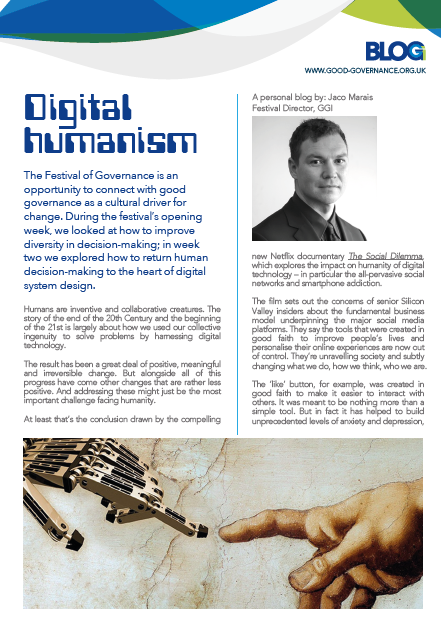