Integrated care systems (ICS) are much more about the right mindset than structures and they must be focused on actions not debate but they will need some organising principles and working arrangements.

An old model for getting things done recently revived for local government is the development corporation model, which has been used successfully for major projects in the UK since the late 1940s.

New town development corporations (NTDCs) were established to deliver more than 20 new towns across England, such as Telford and Milton Keynes. Cwmbran was an example in Wales as was Glenrothes in Scotland

From the early 1980s, urban development corporations (UDCs) were used to lead the renewal of former industrial areas in many English cities, helping to create thriving new areas such as Canary Wharf in London and Royal Albert Dock in Liverpool.

In Wales the Cardiff Bay Development Corporation (CBDC) was set up in April 1987 to regenerate the 1,100 hectares (2,700 acres) of dockland between Cardiff and Penarth. – its aim was to “put Cardiff on the international map” and boost the image and economic wellbeing of the area.

Its main objectives were to:

While controversial, these models brought a number of advantages to complex projects including:

In its autumn budget of 2018, the government announced that it would be establishing a new £10 million capacity fund to generate innovative proposals for new business-backed development corporations and similar delivery models. The funding would help to explore delivery models that have been less commonly used in a contemporary context, such as development corporations.

Another model which ran in the 1970s was community development projects (CDPs) and a number of small area programmes. These started with high hopes to tackle poverty but, as US writer Huey Perry recalled in his Mingo County Chronicle, ‘they’ll cut off your project’ as soon as government agencies felt the communities were getting too powerful and coordinated.

The different types of community development models were needs-based, goal-oriented, or asset-based. A community could use one model or more, either at one time or over a long period, covering many different community stages.

Local government was often the catalyst that drove community changes through these models but they found it difficult to let go of or endorse funding decisions.

From 1970 to 1978 the British government funded 12 CDPs in some of the most impoverished neighbourhoods in England, Scotland and Wales. The projects were given resources to hire researchers and community workers to work alongside community residents toward the goal of ameliorating poor local conditions.

The projects began in a spirit of great optimism and although they were expected to be short-lived, by 1978 all 12 projects had been shut down, some amidst a great deal of acrimony. In a few cases, successor projects, scaled back and with a more modest brief, continued. As a national anti-poverty initiative, however, the programme ended.

The first four projects were launched in 1970:

The next four projects were established in 1971-72:

Both of these arrangements had local control, albeit the first (DCs) were sponsored by central government and largely ignored local points of view, and the other (CDPs), though firmly entrenched in the community, soon lost the trust and confidence of existing administrations.

ICSs need a new system that combines a strong predisposition to action and outcomes together with confidence from the local population and established institutions in health, local government, business and the third sector to deliver a massive agenda designed to overcome the more evident disadvantages, pent up demand and reduced capacity. 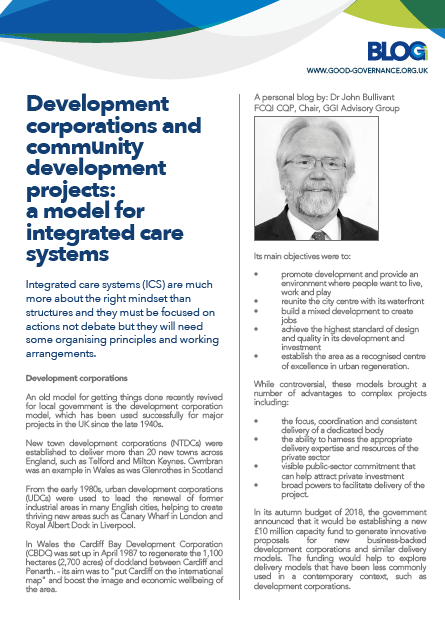 Closing date: 12 August, with interviews to be held in the last two weeks of August.  The interviews will be virtual.