In an age of integrated care, where collaboration is increasingly important right across the continuum of care, building fruitful relationships with stakeholders is vital.

Too often, these key relationships are tokenistic and managing them is categorised as a duty that falls to a board’s external communications function rather than being a core responsibility.

The time has come to look beyond mere compliance – to go beyond paying lip service to community engagement and see it instead as a core strategic activity to legitimise decision-making and increase resilience.

It’s a view that’s shared in Judge Mervyn King’s fourth report (King IV) on corporate governance, published in 2016. GGI has long believed that the approach set out in King IV is of enormous potential benefit to NHS boards seeking to improve their governance.

One of the key principles set out in the report is this: ‘In the execution of its governance roles and responsibilities, the governing body should adopt a stakeholder-inclusive approach that balances the needs, interests and expectations of material stakeholders in the best interests of the organisation over time.’

King IV recognises that institutions are held accountable by increasingly active and engaged stakeholder expectations. So, how can these crucial relationships be strengthened?

Climbing the ladder of participation

Boards could do worse than study Shelly Arnstein’s influential 1969 paper Ladder of Citizen Participation, in which she describes a model of shifting power that’s fundamental to authentic community engagement and accountability.

At the foot of her ladder are the non-participation elements of manipulation and therapy, then come the tokenistic notions of informing, consultation and placation – these are the levels at which many boards currently operate. But at the top of her ladder are three types of participation that represent genuine citizen power: partnership, delegated power and, ultimately, citizen control.

While the very top of Amstein’s ladder might be beyond the reach – or the desire – of NHS boards, the ideas of partnership and delegated power are certainly worth pursuing.

Although all NHS organisations have community engagement responsibilities, it’s a central part of clinical commissioning groups’ activities and there are numerous examples of good practice among CCGs across the country.

In Warrington, for example, staff from the local home improvement agency are conducting home visits accompanied by pharmacists, which enables them to identify potential problems with people’s living environments and resolve them before they affect health. And in Cornwall, the CCG is working with Age UK to help vulnerable elderly people achieve their goals, from going shopping to setting up coffee mornings.

The need for levels of engagement that sit near the top of Amstein’s ladder of participation will only increase over the coming years, as trusts further embrace the concept of integrated care in their efforts to meet the growing challenges of healthcare management.

The benefits of forging deeper partnerships with communities are clear. It’s time for boards to step up to the task of developing and sustaining clearer, stronger bonds with these key stakeholders, for the benefit of all. 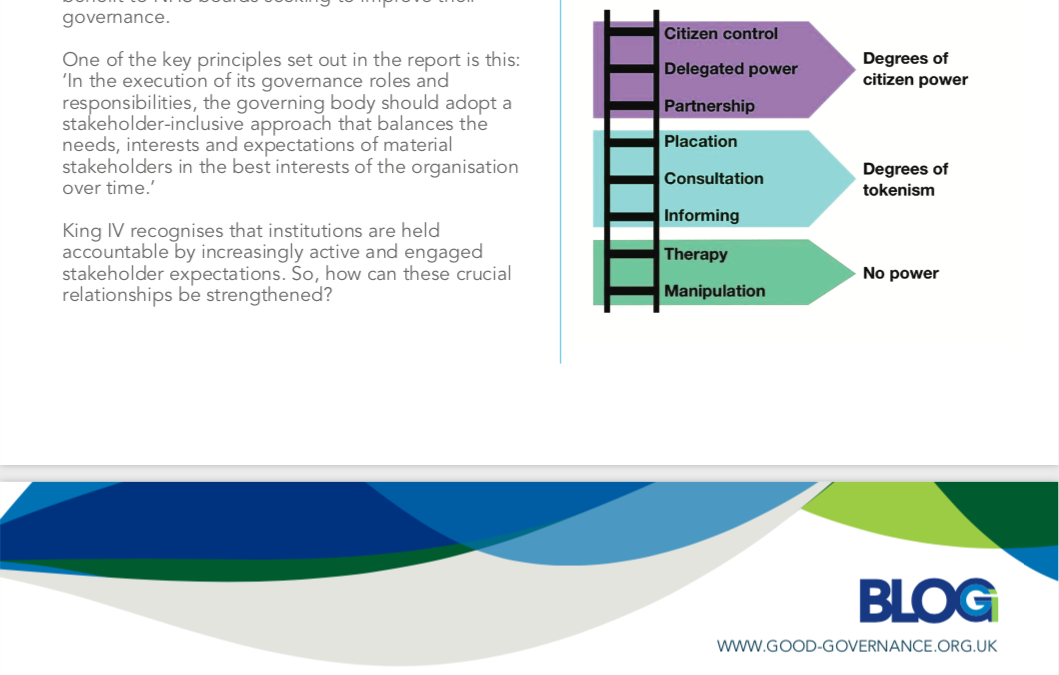