Climate change continues to be the biggest threat facing the world, yet the NHS is one of the UK’s biggest polluters. It’s time that sustainability became a core value and a strategic driving force at all levels across the NHS.

“Climate change threatens to disrupt health systems’ ability to deliver high-quality care and undermine the past 50 years of gains in public health, with more intense heatwaves, higher risks of flooding and damaging storms, and a changing pattern of emerging infectious diseases”, a report recently published in the Lancet warned.

Moreover, man-made air pollution causes chronic conditions such as cardiovascular and respiratory diseases, as well as lung cancer, which result in reduced life expectancy. Public Health England estimates that in the UK this has an annual effect equivalent to 28,000-36,000 deaths.

Yet a study in 2019 found that the NHS produced 5.4% of the UK’s total carbon emissions. On a par with 11 coal-fired power stations, these greenhouse gas emissions are not much lower than those for the aviation industry. That the NHS should be contributing to a phenomenon that leads to ill-health should jar with all right-minded healthcare professionals. So, what is the NHS doing about this and how can its efforts be improved?

Following the publication of the Climate Change Act in 2008, the Sustainable Development Unit (SDU) was formed and the NHS began to track and report on its carbon footprint properly. The various initiatives and strategies of the SDU have resulted in actions being taken in areas from facilities to suppliers and people. These efforts are often cited as having led to a 19% reduction in the carbon footprint of the NHS over 12 years, despite a 27% increase in activity – which translates to a 36% carbon efficiency improvement.

However, these gains were in large part down to the advances by the UK’s energy system, which has made significant improvements in energy intensity and a shift away from coal to cleaner fuels and renewable sources of electricity. Over the same period UK net carbon emissions fell by about 34%, while the population and economic activity continued to grow. GDP grew by a little under 15%, so if this is used as a measure of increased national activity, the UK’s overall carbon efficiency improved by 54%. In short, the NHS is still lagging behind other areas and there remains much to do.

Commitments to sustainable healthcare have been set out in the NHS Long Term Plan, the 2020 NHS Operational Planning and Contracting Guidance, and the Standard Contract. Then, in October 2020, the NHS made a bold commitment to become the world’s first carbon net zero national health system.

The targets it set aim to reduce to net zero the NHS carbon footprint (emissions over which there is direct control) by 2040 and the NHS carbon footprint plus (emissions over which there is influence), by 2045. Ambitions were also outlined for interim 80% reductions in the former by 2028 to 2032, and the latter by 2036 to 2039.

How to deliver on these promises

The report Delivering a ‘Net Zero’ National Health Service contains a number of early steps that will be taken to decarbonise. The eighth and final early step is the following:

“Our values and our governance: By supporting an update to the NHS Constitution to include the response to climate change,… ensuring that every NHS organisation has a board-level net zero lead, making it clear that this is a key responsibility for all our staff.”

Following this are a number of sections that cover direct interventions to decarbonise the NHS, sustainable models of care, building staff capability, forming partnerships and embedding sustainability. But it is this eighth early step that is key, because it touches on goals, roles, responsibilities and accountabilities that will need to be put in place for everything else to work.

The report is high level, but could still have included more about the systems that will be required to pull these things together to ensure delivery on the objectives.

Adding sustainability as an eighth guiding principle of the NHS Constitution and including a commitment to sustainability as an NHS value are key to ensuring that carbon reduction drives the different parts of the NHS. But it does not stop here, or with initiatives and programmes at a national level. Each constituent part of the health service will need to pull in the same direction if the ambitious targets are to be achieved. The net zero goals added to the NHS Constitution must be framed as a strategic objective of every trust board, with a corresponding risk of not delivering this on time listed on the board assurance framework (BAF).

Each NHS organisation will need its own sustainability plan, with milestones that mirror or better national ones. To be able to deliver on this, overarching sustainability goals will need to be rolled down through the different tiers of management, with appropriate objectives set at the different levels that all pull together.

New roles and accountabilities will need to be created in the care groups and the specialties. A sustainability management group will need to coordinate the efforts of each trust and report in to the executive group, which in turns provides assurance to a sustainability committee.

In order for robust reviews of progress against objectives to be possible, effective data collection and reporting will need to be put in place. It will not be enough to have the Greener NHS Dashboard at the national level – something similar will need to be set up at each trust. An earlier Illumination argued that integrated reporting on all areas of an organisation’s activities is necessary so that impacts are not viewed in silos. Reporting at all levels will need to incorporate planned activity, actual activity and variances between the two.

This should all feed into a robust review process. Where variance reporting indicates an area is flagging, the review process must ensure the decisive actions that will put it back on track are taken. Where variances signify that an area is doing exceptionally well against its targets, it is essential the right mechanisms are in place for sharing best practice across the organisation and wider NHS.

Review must take place at every tier of management, from the wards feeding all the way back up to the very top of the organisation, in the same way that the goals were rolled down. Trusts should be compelled to report annually to the public on their environmental impact and, to ensure they are delivering on their objectives, the regulator (CQC) should use a sixth question/rating relating to sustainability when inspecting them.

CNN founder and philanthropist Ted Turner once said: “While the problem can sometimes seem overwhelming, we can turn things around – but we must move beyond climate talk to climate action.” For any boards that need support with this, GGI stands ready to help. 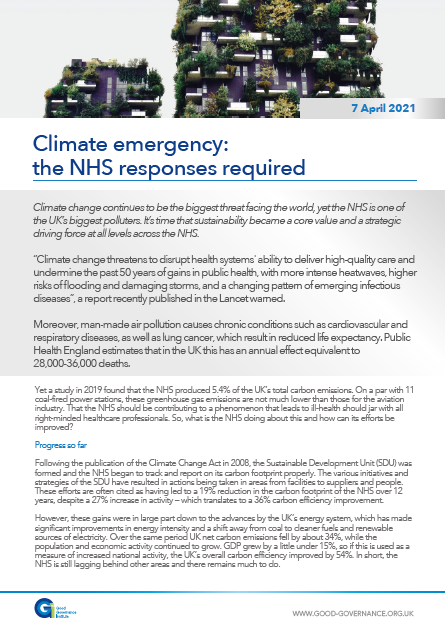