This week marked the halfway point in our series of six webinars exploring integrated care. Our discussion theme was the economics of population health. It was another well-attended, stimulating session, expertly chaired by Marie Gabriel, independent chair of East London Health and Care Partnership .

Once again, our topic was introduced by health and public policy economist Jacque Mallender from Economics by Design, who covered the factors likely to influence the level of investment in population health, asked how priorities should be set across partner agencies, and highlighted some of the key factors upon which the success of the ICS model depends

As she did last week, Jacque has kindly written a guest bulletin covering the points she raised in her talk.

Busy as we all are working on the detail of integrated care, it’s sometimes worth reminding ourselves – as Jacque reminded us in her talk – of the compelling economic argument behind greater integration. Let’s just reflect on a couple of the points she raised.

As Jacque said, these are phenomenal returns and yet the amount we spend on public health is miserly. So why do we seem so reluctant to spend on public health programmes? We now have decades of evidence to show that effective spending in this area is incredibly good value for money. Jacque said: “From an economist’s perspective, what’s not to like?” From the perspective of governance experts, we draw the same conclusion.

In the chat and discussion that followed Jacque’s talk, two of the big themes to emerge were building trust and sharing power.

GGI director Mark Butler raised the ‘enormous challenge’ of sharing power. Are we really prepared, he asked, to give up power to the broader system? Perhaps it’s something that should be explored more openly and the consequences worked through more thoroughly. One guest talked about the need to subordinate our decision-making to bigger organisations – “we won’t make progress until we’re able to do that”, they said.

Another guest replied: “Doctors have been learning how to work better towards therapeutic alliances for years. The real question here is whether managers can give up their power.”

Trust is going to be key in bridging what one of our guests called a ‘massive gulf in understanding’ between organisations.

One guest commented: “It is critical that we take time to think, build relationships and trust between organisations and understand where the barriers are in the system. It is so important to have a consistent base for services and health for the long term.”

Another addressed the need to build robust governance structures to support integration. They said: “There are lots of examples of integrated working that falls apart when individuals leave. Where does the elastic snap us back to when people aren’t putting in the specific effort to build this new future? I would say it’s often regulation and governance. It should be made to happen by default but how can we build governance to create the conditions that makes working together the default stable state?”

The mood was overwhelmingly positive but one guest brought us down to earth by observing: “One of the problems I am musing on is that we’re looking at integrating systems when even within single organisations patient experience can be fragmented and disintegrated – for example surgery delivered without adequate physiotherapy follow-up because the physio budget and team has been severely reduced. I’m excited by ICSs but a bit of me thinks there are some fundamental problems that we’ve not yet got a grip on within organisations, never mind across them.”

It was a good and pragmatic point but I maintain that this is ultimately a time for optimism. I really do believe that this time it can be genuinely different, especially if the people who attended our webinar and contributed to the conversation make themselves part of the solution. Governance is the platform on which real change can be built and collectively we can really do something special for citizens.

In next week’s session, we’ll be looking at the role of anchor institutions have to play in integrated care. There’s still time to register your interest if you’d like to be part of the conversation. You’ll find the details on the events page of our website. 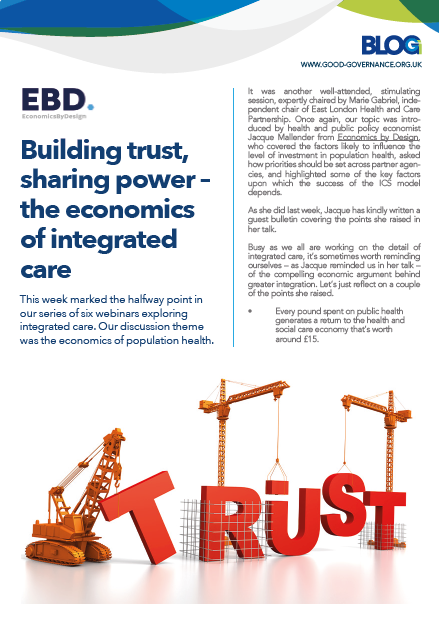