Braced for the second wave

As the political debate continues over the merits of local coronavirus containment measures versus some form of national ‘circuit-breaker’ lockdown, the statistics show that there remain significant regional variations in the numbers of COVID-19 cases across the UK.

London was the epicentre of the pandemic in the UK during the early months but the highest infection rates are now to be found in the north west and north east of the country, with London now below the national average, alongside the south east and south west regions.

Grimly fascinating though these shifting regional statistics are, it’s important that they’re not allowed to distract from the very real challenge facing healthcare workers throughout the UK as they face the second wave of the pandemic.

To understand the regional differences, GGI brought together board members from numerous NHS trusts to share their thoughts as part of our series of weekly non-executive director meetings, in which NHS NEDs discuss the future of health and social care.

The conversation revealed significant variations in numbers of patients hospitalised with COVID-19. East Lancashire had experienced a 125% increase in hospitalisations from 1 to 6 October, whereas Cornwall’s intake had remained low and stable. The stark differences in caseloads across relatively short distances was underlined by the experience of North Staffordshire Combined Healthcare NHS Trust, which had 72 per 100,000 cases, in contrast to 552 per 100,000 in neighbouring Liverpool. These numbers reflect the diverse national picture of Britain’s second wave. For example, Liverpool has seen 723 cases per 100,000 while there have been just 46 per 100,000 in West Sussex.

A key concern for all trusts was the strain on hospitals during the first infection peak in March and April – and especially its impact on staff mental health. Many NEDs feared frontline employees would fall victim to burnout, having worked at a consistently high intensity since March. This was compounded by low morale as the indefinite nature of the pandemic has become clear. Tragically, a number of hospitals had experienced staff deaths due to COVID-19. It is immensely traumatic to care for colleagues suffering badly from COVID-19 – NEDs likened it to caring for family members.

The pandemic has forced rapid innovation in much of our daily lives and NHS staff welfare is no different. Trusts have developed a range of approaches to meet the diverse and increasingly complex wellbeing needs of their employees and address the increase in mental illness. One trust introduced Oasis Centres to give staff a chance to take calming breaks away from the ward and reflect on their emotional and mental wellbeing with friends. This was complemented by the use of a therapy dog used in wards to tackle anxiety and boost spirits.

Particular staff demographics have prompted tailored wellbeing responses. One trust, which has a large number of overseas-born staff, has actively accommodated all staff requests to take time off to return to their country of origin to see their families. When staff returned to the UK, they were allowed to quarantine without taking additional holiday. This policy, combined with individual staff pandemic wellbeing plans and risk assessments, has been instrumental in keeping morale high and ensuring that staff members feel valued.

Trusts have also launched a range of measures to manage service delivery and highly-strained ward capacity over the next six months. Three trusts in the north-west have collaborated to expand their Home First system, which aims to treat all patients whose care can be administered outside a hospital in their own home. This now includes clinical assessments, diagnostics and prescribed treatment plans by advance nurse practitioners, and social care assessments to understand where help is required for cooking meals, washing and dressing.

The mental health of managers was also a key concern for many NEDs, as the immense pressure on everyone from middle management to senior executives may begin to impact performance. Again, the fear is that this will be exacerbated by growing demand for services and the increasingly long hours and difficult decisions that will need to be made in the coming months. NEDs noted the importance of assisting executives through this period and ensuring they take exercise breaks when working from home all day, manage their workloads effectively and develop barriers between work and home life.

The diverse input from the NEDs served to underline the importance of trusts being creative and agile in adopting new ways to support staff. They have often had to adopt individualised approaches to staff welfare to manage demand. Most importantly, management must listen to their staff to ensure they get the particular support they need to facilitate continued high-level patient care in the face of increasing demands over the months ahead. 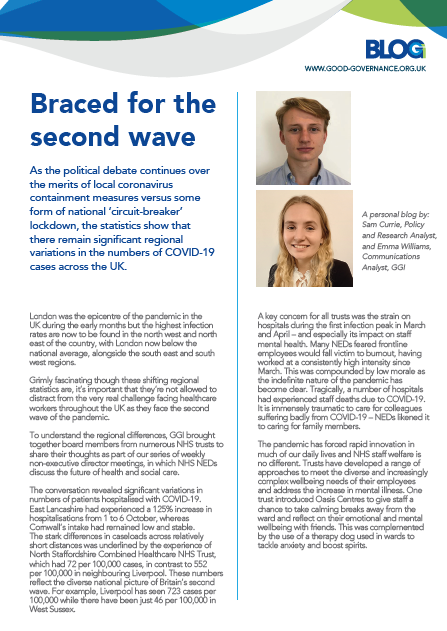