In case you hadn’t noticed, there’s an election on!  So, what’s in the manifestos for a governance addict – who might win your vote, using that single, narrow criterion?

All the main parties have something to offer aspiring nurses, GPs, and allied health professionals and, if the number of words used is significant, the Liberal Democrats and Labour have a lot more than the others to offer on mental health.  All of them describe a lot of “what” with not a lot of ”how”: though they are all certain that their promises are affordable.

In governance terms a Labour, Lib Dem or Green government would repeal the 2012 Act whilst the Conservatives wouldn’t.  The Lib Dems and Greens suggest they are keenest on place-based care – the Greens would introduce community leadership and the Lib Dems would encourage “emerging governance structures for Integrated Care Systems to include local government and be accountable to them.” Gosh!

Labour intends to bring pretty well all of the NHS back into public ownership with the Secretary of State once again responsible for providing a comprehensive and universal healthcare system – so goodbye FTs – without competitive tendering because all services are going to be provided in house.  There won’t be a fire sale of NHS assets and no back-door privatisation via the long-term plan because integration will be co-ordinated through public bodies.

In complete contrast, it’ll be business as usual under the Conservatives with a Johnson government promising to enshrine in law its fully funded long-term plan – goodbye Competition and Markets Authority in health, hello collaboration. – and a lot more besides; it’s not as bland as it reads.

So, where does that all get us?

Well all the parties are promising to spend more on the NHS – will this give the NHS its needed cost of living + increase every year, not to say a bonus for surviving the years of flat cash.  There are added governance implications if the money comes in a rush – making sure its use is prioritised (though what’s important depends on who you vote for – see above)  and spread across the country.  Balancing national priority against local need to deliver results that allow politicians to claim benefit from their investments will be, shall we say, testing?

Whoever wins will change delivery structures.  The radical shift to local authority accountability runs the risk of NHS funding and services being subject, at least in part, to local party politics and the proposal to bring the NHS back into public ownership will have huge governance implications especially as there’s no hint in the Labour Party manifesto what, in organisational terms, that means.  The development of “not regulated collaboration” lies at the heart of the Conservative party’s plans.  There are many challenges with this agenda not the least, assuming the players team up in the first place, what happens when there’s a row.

Sticking to my governance brief, improvement to patient experience and quality of care, especially in mental health and social care (where there are lots of promises) is implicit in all the manifestos; measurement of the Lib Dem and Labour promises could create a new, revivalist reporting movement.

And apart from trying to address staff shortages by reintroducing grants or bursaries for nurses and allied health professionals and recruiting more GPs (where from, I wonder) the documents are quiet if not silent on one of the largest workforces in Europe.  They seem to overlook the golden thread between contented staff and well looked after patients – it’s not just about money.

Where, in governance terms does all this get us?  No governance professional is going to be idle whatever the outcome on 12th December even if we see ancient policies being recycled.  So, you pays your penny and takes your choice about where to put your cross.  Whether you fear “finding something worse”, as Belloc put it, depends on your ability to turn problems into opportunities – but isn’t that what we governance addicts do every day?  Our real job is to keep a-hold of the imperative to make governance support the highest standards of patient experience the NHS is capable of offering – roll on Friday the 13th. 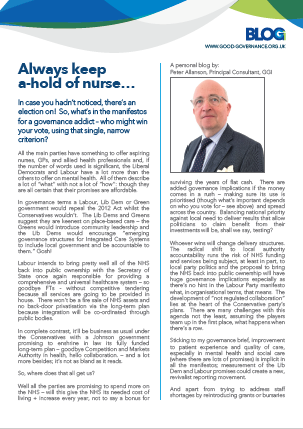