A year for doing things differently

2020 has forced us all to embrace new ways of doing things. We saw seismic shifts in areas such as primary healthcare, where, for example, there were around half the number of face-to-face appointments with nurses, doctors and carers across England in August compared to the same month last year and nearly three times as many telephone consultations. And, to the consternation of retailers, public transport operators and urban businesses all over the country, it could well be that we have finally turned a corner in the trend for home-working.

But amid these huge systemic changes there have been numerous smaller adaptations that are no less remarkable in their own quieter ways. At GGI, one of those has been the transformation of our annual Festival of Governance into an all-virtual event.

It could so easily have been a flop. Just like any other festival, our Festival of Governance has always truly come alive when people gather together over drinks, with music, in beautiful venues – when unexpected connections are made and conversations take place that lead… who knows where?

However much care is taken in the curation of events, the natural assumption was that it would be very difficult to recreate that family feeling online.

But that fear proved unfounded time and again over the month of September as the Festival’s packed programme played out – and never more so than during last week’s GGI annual lecture. Our keynote speaker this year was Rob Whiteman, Chief Executive of the Chartered Institute of Public Finance and Accountancy (CIPFA).

We opened the session as we opened all Festival events – by transporting people away from their homeworking environment with a uplifting, emotionally charging video that took them time-travelling from the Renaissance to the Great Fire of London, to 1980s New York and the UK miners’ strike, before swooping back to 2020 and the black lives matter movement – all accompanied by the stirring soundtrack of The Greatest Show on Earth by Nightwish.

Rob’s theme was “Who is responsible for what? Exploring the blurred lines between government, governance, the third sector and the public sector.” He looked back over the gradual changes that have taken place in public decision-making since the Northcote-Trevelyan Report of 1853 established the British civil service’s core values of integrity, propriety, objectivity and appointment on merit.

There were fewer and fewer requests for direction from civil servants to secretaries of state, he said, and the appointment process seemed to be moving away from a purely merit-based system overseen by the Civil Service Commission to something more political – as we saw with the appointment of Dido Harding as head of the NHS Test and Trace programme in May this year.

Rob also pointed to a blurring of the lines of accountability between civil servants and their political masters, and to ‘changes by stealth’ to the system of checks and balances designed to prevent politicians having a ‘blank cheque’ to do whatever they want.

He said: “We want to live in a country where decisions are made based on evidence by people who have a mandate and the appropriate experience and expertise to make decisions within the law. There should be transparency and accountability for what’s being decided and principles of integrity should operate throughout.”

It was a fascinating topic that prompted some lively discussion in the multiple online breakout rooms, as our guests pondered how to make politicians listen more, or whether a written constitution might help to redress the balance, or how these trends might be manifesting themselves in local decision-making.

Any lingering concerns that might have remained about the effects of going online on the spontaneity and sheer fun of the Festival melted away as we watched our guests discussing what needs fixing in our democracy and rethinking what is and isn’t constitutional in Britain today – a Renaissance 2.0 born in 2020, if we choose to make it so?

The sight was made even more heart-warming by the fact that so many had followed the dress code and come to the event wearing pink, to express solidarity with each other and anyone who has ever been made to feel different.

The Festival’s final event featured a discussion around the themes raised in a video interview of Professor Mervyn King – who himself delivered our festival lecture back in 2015. Introduced by our CEO Andrew Corbett-Nolan as the ‘godfather of governance and sustainable thinking’, Professor King talked about the importance of sustainable and ethical value creation – rather than simply profit – as a key outcome of good governance.

In one of our daily bulletins back in May, Professor King introduced us to the term ‘coronanomics’, which describes the dual challenge facing governments of keeping the all-important R number of reinfection down while preventing economic collapse.

Rising to this challenge, he said in last week’s video, would require a focus on long-term thinking as well as short-term survival. Intellectual honesty, a willingness to compromise, and integrated thinking were all crucial, he added.

It was a suitably uplifting vision with which to bring our festival to a close. And as we reflect on a month of fascinating discussions, of new connections forged despite the lack of physical proximity, and of many moments of inspiration and enlightenment, it gives us hope as we look forward to making 2021 a year of Renaissance 2.0.

As a postscript to this year’s festival, our CEO Andrew Corbett-Nolan has recorded three videos in which he visits some of the themes covered in our Festival Review (the first part of which is now available to download from our website), by talking about quality management from London to Lisbon with 2020 hindsight. You can view the videos on GGTV Governance, our YouTube channel.

Finally, as another festival month draws to a close, we’d like to thank everyone who made this year’s Festival of Governance so special. Our thanks go to the speakers, who provided such rich food for thought; to the participants, who brought everything to life with their contributions; to our NHS colleagues, whose input helped us to stay up to the minute with our understanding and shaped both the themes of the Festival and the content of our bulletin series; and to the GGI events and communications team, for their meticulous preparation, hard work and ingenuity to make this first online festival such a success.

Against all the odds, it’s been a wonderful series of events. We’re already looking forward to next year 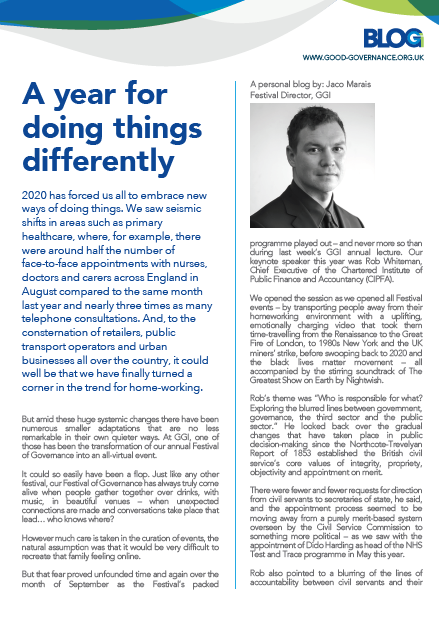