A way forward for the performing arts | Good Governance Institute

A way forward for the performing arts

There aren’t many sectors that have been hit harder by COVID-19 than the arts. In a previous bulletin, we looked at how one enterprising gallery – Hastings Contemporary – found ways to stay visible and solvent thanks to a robot and the support of a famous artist.

But for performing arts organisations there are no such options. There is no escaping the stark fact that the doors of theatres and concert halls will have to remain shut for some time, despite the slow reawakening of other sectors all around them. From Glastonbury to Glyndebourne, the West End to regional repertory companies, numerous arts organisations have been forced into a prolonged furloughed hibernation.

With most venues requiring 70% occupancy or more to break even – some smaller venues struggle to make ends meet with a full house – the idea of socially distant performances is a non-starter for almost everyone. Of the approximately 700,000 people employed by the arts and recreation sectors, around half have been furloughed, according to the government’s own figures. But with the furlough scheme due to close on 31 October and no imminent prospect of most venues being able to open, the crisis seemed certain to enter a dark new phase – an ITV News survey suggested that more than 97% of venues faced permanent closure.

Charlotte Jones, CEO of the Independent Theatre Council (ITC), which acts as a management association for around 550 performing arts organisations across the UK, says the financial risk isn’t evenly spread. She says: “Quite often, it’s the smallest organisations that carry a disproportionate share of the risk. If you take a classic tour of a new play, the chances are it will take in a range of venues, some of which will be prepared to share the risk burden by sharing box office but others will insist on the touring company hiring the venue or taking the lion’s share of revenues. Quite a few companies are expected to take the full cost of cancellation. And that can be ruinous.”

Rishi to the rescue?

Into this existential crisis on 5 July stepped the UK government with a huge £1.57bn bailout package described by Chancellor Rishi Sunak as the biggest-ever single investment in UK culture. The Chancellor said: “We’re giving them the vital cash they need to safeguard their survival, helping to protect jobs and ensuring that they can continue to provide the sights and sounds that Britain is famous for.”

But is that true? Will the bailout go far enough and what can struggling arts organisations do to safeguard their future?

Charlotte believes the performing arts are, to an extent, a victim of their own success. She says: “Most of our members are touring companies and over the years they have been expected to make more and more of the money they need to survive from earned income rather than funding. And they’ve done that incredibly successfully. But as this crisis shows, when their source of revenue dries up they are incredibly exposed.”

Many arts organisations are effectively still on ice, according to Charlotte, surviving on the furlough scheme while they monitor developments. She says it’s still unclear what effect the imminent end of the scheme and the bailout money will have. She says: “It sounds like a lot of money but this is a massive sector so it will need to be spread relatively thinly. The government has given the money to bodies such as the Arts Council to administer and it’s still unclear how it’s going to be used. Is it going to be compensation for lost income or will it be used in a more strategic and forward-looking way to help rebuild the sector and protect its future? We just don’t know yet so we’re in this tantalising but also very weird, unnerving period.”

Amid all this uncertainty, Charlotte sees signs of hope. She says: “People are experimenting. If they can’t make money they’re looking for ways just to stay visible. There’s one Liverpool company called 20 Stories High that’s turning up on the doorsteps of people who are shielding from the virus and performing quick ten-minute pieces of interactive theatre that help people to feel connected again. I spoke to a dance company that’s been working with schools online, and another rural theatre company that’s created cabaret-style events to enable social distancing.”

Charlotte says it’s time to think outside the box. She says: “The key is to think creatively and differently – and not to rule anything out. We must all be prepared to investigate completely different business models and ways of working.

“It’s a good time for arts organisations to revisit their fundamental values and reconnect with what they’re here to do. I believe boards have a vital role to play in this process. This is a time for focused, measured practical leadership.

“Most arts organisations don’t exist to make money. They fulfil an important role. Theatre in particular brings people together; it’s all about the shared experience. It connects people and helps us all to make sense of a confusing world. We’ve never needed it more.” 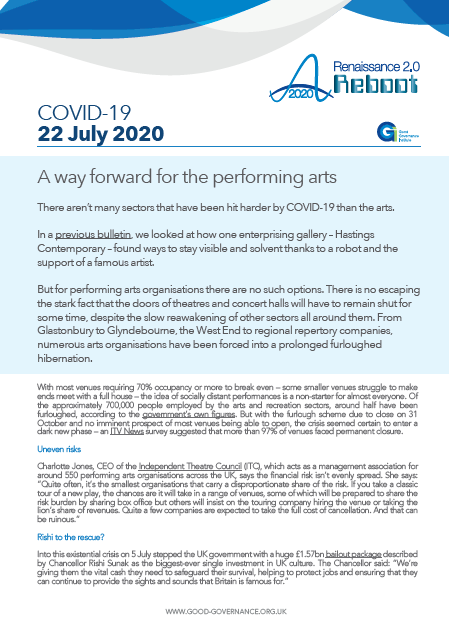