Dame Fiona Caldicott, the UK’s first statutory National Data Guardian for health and social care, has been named as the recipient of the 2019 Good Governance Award. She will be honoured at the Good Governance Institute’s (GGI) Annual Lecture, an event on September 5 which marks the commencement of GGI’s annual Festival of Governance.

GGI’s Chief Executive, Andrew Corbett-Nolan says, “Dame Fiona is a champion for patients and the public. With this Award we are paying tribute to her for her work towards improving governance. We acknowledge her contribution, one that aligns with our mission of helping to create a better, fairer world.”

Having dedicated herself to public service Dame Fiona’s career boasts many professional highlights. Since being appointed to the position of National Data Guardian in 2014 she has helped to encourage public trust in the protection and appropriate usage of personal confidential data, specifically health and care information. She chaired the National Information Governance Board (NIGB) for Health and Social Care (2011 to 2013), a body responsible for a range of advisory functions relating to information governance such as ensuring the confidentiality of patient information. She led an independent review of information governance from 2012 to 2013. And, as Chair of the Caldicott Committee which focused patient identifiable data in the NHS, she spearheaded the creation of ‘Caldicott Guardians’ in all provider organisation in the NHS.

Some of Dame Fiona’s other notable achievements include being named chair of the Oxford University Hospitals NHS Foundation Trust (2009 to 2019), Principal of Somerville College at the University of Oxford (1996 to 2010), chair of the Academy of Medical Royal College (1995 to 1996), and President of the Royal College of Psychiatrists (1993 to 1996). She was also a consultant and senior clinical lecturer in Psychotherapy for the South Birmingham Mental Health NHS Trust, and held a position as a clinical professional.

The Good Governance Institute’s Festival of Governance runs from September 5 until November 20. For more information on events please visit https://www.festivalofgovernance.org/. 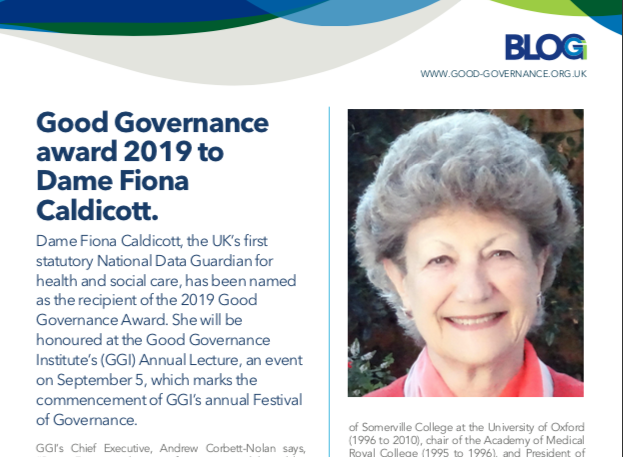